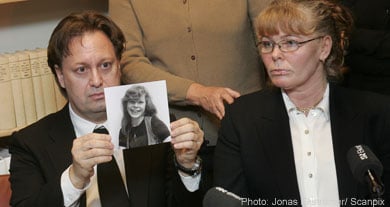 At a press conference on Wednesday morning, the women released the names of dozens of politicians and celebrities said to have frequented the brothel at the centre of the so-called Geijer Scandal.

Although the statute of limitations imposes a ten year cut-off point for damages claims of this kind, the women’s lawyer, Niclas Karlsson, was not anticipating a rejection from the state.

“I do not expect the state to make reference to the statute of limitations. It would be deeply objectionable as far as the general sense of justice is concerned,” he said.

The women, aged 14 and 15 at the time, were both living in state care homes when the scandal broke.

“Despite knowing that the women were victims of a crime, the state failed in its duty to bring the men to justice. This caused the women serious damage and deformed the subsequent course of their lives,” said Karlsson in a statement.

One of the women, Eva Bengtsson, participated in Wednesday’s press conference, as did the sister of the brothel madam at the centre of the scandal. Both read statements that included the names of politicians, entertainers and actors said to have been customers at the brothel.

Karlsson claimed that the names of 70 customers had emerged in the course of the police investigation into the brothel where the women worked.

“She was very skilled at recognizing voices. She never named names. Instead she used code words like Boot Boy, Trotter and Bobo,” he said.

He also confirmed that the names mentioned at the press conference tallied with the names that had emerged over the course of the police investigation. Asked whether these people were customers at the brothel, Sjöstrand replied:

“Yes, the girls say that they were,” he said.

The scandal began with a raid on a Stockholm brothel in 1976. In May of that year, the brothel madam, Doris Hopp, was arrested on pimping charges. A police investigation soon revealed that many of Hopp’s customers were well-known politicians.

In November 1977 newspaper Dagens Nyheter rocked the foundations of Sweden’s political establishment by publishing allegations citing Justice Minister Lennart Geijer as one of the customers.

The newspaper claimed as its source a report in which chief of police Carl Persson informed Prime Minister Olof Palme of the involvement of politicians in the prostitution scandal.

But Palme vehemently denied the allegations, accusing Dagens Nyheter of aggravated libel. The newspaper was forced into a retreat and two days after the publication Lennart Geijer received an official apology.

It later emerged however that, a few minor details aside, the newspaper’s assertions had in fact been largely correct. Over the years, there has been much speculation regarding the identities of those who made use of the brothel’s services.

At the time of the scandal broke, it was not illegal to pay for sexual services. But the fact that politicians socialized with prostitutes was viewed as a security risk since staff from foreign embassies were also reported to frequent the brothel.