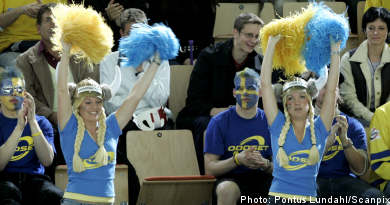 When the area around Lake Mälaren was Christianized about a century later, women’s dress style became more modest, according to archaeologist Annika Larsson.

Previously, it was thought that Viking ladies wore a long garment held up by braces, made of square pieces of wool whose front and back sides were contained with a belt. The characteristic decorative circular buckles, a common find at many Viking-era grave sites, were believed to have been worn at the collarbone.

“The excavations which were done way back in the 1800s showed that this is not correct, and that the buckles instead were placed centrally over each breast. The traditional interpretation is that the buckles fell down to the waist after the body decomposed, but that is a prudish reconstruction,” says archaeologist Larsson.

Her theory is based partly upon a recent discovery in the Russian town of Pskov, Novgorod, which is located on the trade routes which took the Vikings eastward. Substantial finds in Russia of Viking women’s wear have provided a better understanding than could previously be gleaned from the small bits of fabric discovered at Birka, a major Viking island settlement some 30 kilometers West of Stockholm.

“The (Russian) discovery is totally inconsistent with the way the Viking women are usually depicted. For example, that part of the garment which was assumed to be the front is too broad. I don’t think it was a front, but was instead worn behind like a train,” explains the researcher.

Larsson’s theory that the well-dressed Viking woman’s garment was open at the front and had a train is supported by a gilded bronze figure discovered in the county of Uppsala. She feels that some aspects of the heathen fashion were too much for Christian missionaries.

”One might imagine that the Christian church had some misgivings about a style of dress which emphasized the breast and in addition revealed the front of the linen blouse underneath. It is also possible that this outfit was associated with pagan rituals and was therefore forbidden,” Larsson speculates.

The exhibit showing the new view about clothing in the age of the Vikings opened at Uppsala University’s Gustavium Museum on Friday, and will continue until September 24th.