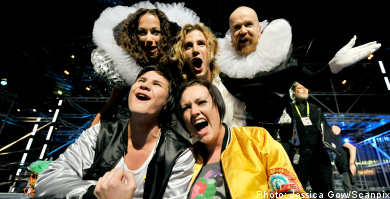 There was to be no repeat of last week’s shock omission, when Swedish superstar Carola Häggkvist could only manage a second chance place in Kiruna on March 8th.

BWO’s Alexander Bard explained the band’s success with their disco hit “Lay your love on me” in an interview with SVT:

“Those that won tonight did so because they had good songs. It doesn’t matter who you are or what you have done before.”

The heat in Linköping was not without its surprises however and outsider Frida featuring Headline beat off tough competition from more established artists such as Escobar, who came in last, and Patrik Isaksson, who could manage only fifth.

“It is totally wild. I just want to scream,” exclaimed Frida to SVT when she had realised that her song, “Upp och hoppa” (Get up and jump), had taken the second spot in the final.

Carola will be joined in Kiruna by Thérèse Andersson and Caracola who claimed the second chance spots in Linköping with “When you need me” and “Smilling in love” respectively.

The Melodifestivalen visits Karlskrona next week with artists such as Niklas Strömstedt, Charlotte Perelli, Sibel and Linda Bengtzing and Norman going in to battle for a place the final in Globen on March 15th.