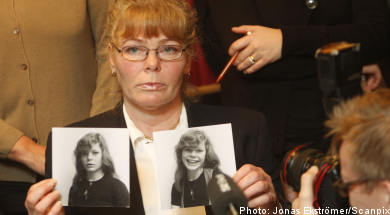 Chancellor of Justice Göran Lambertz, Sweden’s most senior legal official, said he had no reason to doubt that the women had been exposed to “a large number of sex offences”. But Lambertz also referred in his judgment to the statute of limitations, which imposes a ten year cut-off point for damages claims of this kind.

The women were just 14 years old when the scandal broke in 1976.

The Chancellor of Justice agreed with the women that a more thorough investigation ought to have been carried out at the time. But the failure of the investigation to lead to a prosecution did not constitute “an error on which to base a compensation claim”.

Lambertz also concurred with the women that prosecutors should have pushed harder to have those involved in the scandal convicted for purchasing sexual services from children. But this did not mean the women had a legitimate claim to damages, according to Lambertz.

Prosecutors at the time did not think they would be able to successfully pursue charges against the suspects “and for this reason it was not a serious mistake on the state’s behalf,” wrote Lambertz in his judgment.

Eva Bengtsson, one of the women claiming compensation from the state, said she was not surprised by the decision.

“It was expected, but I plan to keep going with this. I think these men should step forward,” she told news agency TT.

Bengtsson added that the verdict had left her with a sense of disappointment in the justice system.

“There shouldn’t be a statute of limitations for something like this. These men are paedophiles. We were 13 and 14 years old when this happened. It wouldn’t be accepted today,” she said, adding that she would reach a decision on how to press forward with the case after consultation with her lawyer.

The scandal began with a raid on a Stockholm brothel in 1976. In May of that year, the brothel madam, Doris Hopp, was arrested on pimping charges. A police investigation soon revealed that many of Hopp’s customers were well-known politicians.

In November 1977 newspaper Dagens Nyheter rocked the foundations of Sweden’s political establishment by publishing allegations citing Justice Minister Lennart Geijer as one of the customers.

The newspaper claimed as its source a report in which chief of police Carl Persson informed Prime Minister Olof Palme of the involvement of politicians in the prostitution scandal.

But Palme vehemently denied the allegations, accusing Dagens Nyheter of aggravated libel. The newspaper was forced into a retreat and two days after the publication Lennart Geijer received an official apology.

It later emerged however that, a few minor details aside, the newspaper’s assertions had in fact been largely correct. Over the years, there has been much speculation regarding the identities of those who made use of the brothel’s services.

At the time of the scandal broke, it was not illegal to pay for sexual services. But the fact that politicians socialized with prostitutes was viewed as a security risk since staff from foreign embassies were also reported to frequent the brothel.