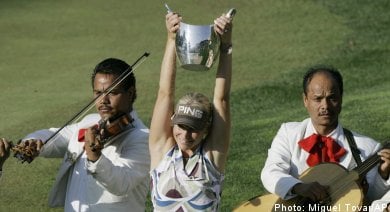 Friberg, of Helsingborg, reached six-under 210 to post a one-stroke victory over Tawain’s Tseng Yani for her first LPGA Tour title.

Oh suffered a final-round collapse, tumbling down the leaderboard with a seven-over 79. Friberg had an eagle and six birdies with just one bogey.

“After the first week in Hawaii, it didn’t take me many hours to feel at home on the LPGA Tour,” Friberg, of Helsingborg said. “I didn’t think I would win so quickly.

“I’m going to stick with my game plan and keep going, but I don’t think this has all sunk in yet.”

Friberg said she will treasure this win not only because it is her first but because she has been battling a virus the past few days.

“I don’t know what to say,” Friberg said. “I guess Sunday’s are my day. A lot of times I’ve played good in the last round and I did today, but I’m just happy to get through because I’ve been really sick the past two days.

“But around holes six or seven, I started feeling better. I’m still kind of anxious to get to bed in the hotel.

Tseng had six birdies on Saturday but managed just one in the final round and finished with a 74.

“I learned a lot from this experience,” Tseng said. “The first couple of holes, I played too fast.

“I know, in the future, I’ll take my time and be patient.”

Oh ended up in a tie for eighth at two-under along with Mexican star Lorena Ochoa, who rebounded from a pair of disappointing rounds to close with a 68.

Ranked number one in the world, Ochoa is now winless in four starts at Bosque Real Country Club.