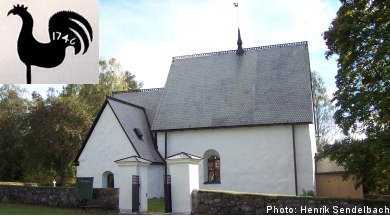 In addition to marking the Resurrection, the island community of roughly 8,000 people can also rejoice that the weathercock on the Old Church in Alnö has been named the Church Cock of the Year for 2008.

“It’s a lovely cock,” said Anna-Maria Larsson, the parish vicar, who plans to mention the award during Easter services on Sunday.

“We’re fortunate to have such a nice symbol on top of our old church.”

The award has been handed out for the past 29 years in a contest co-sponsored by lifestyle magazine Land, and the ‘Society for the Promotion of Church Cocks’ (Kyrktuppsfrämjandet).

The society was founded in 1979 by journalist Bo Engelberg as a way to draw attention to the unique cultural artifacts, 600 of which can be found topping churches throughout Sweden.

The cock standing proud on Alnö Old Church was forged in 1746 and over the years “has become a beloved symbol for many residents of Alnö” according to a statement released with the announcement of the award on Wednesday.

Alnö’s weathercock beat off stiff competition from four other finalists for the 2008 award, collecting the most of the 1,000 votes cast by Lands’ readers.

“There aren’t really any scientific criteria for how the cock is chosen,” said Torbjörn Österholm of Land magazine.

“The whole point is to draw attention to the weathercocks and the cultural history which they represent.”

An oil painting of the winning cock is presented to the victorious parish church by Engelberg in a formal ceremony.

The Alnö Old Church originates from the 12th century, and is known for its ornate interior and sculptures. The Old Church fell out of use at the turn of the 20th century following the completion of a new Alnö Church in 1896.

After decades of neglect, restoration of the Old Church began in the 1930s.

Today the Old Church is used for special occasions, and has become a much- sought after location for wedding ceremonies.

According to Christian newspaper Dagen, the Church Cock in Sweden has historically had a symbolic duty to watch out over parish residents. They are most often found on churches belonging to the Church of Sweden.