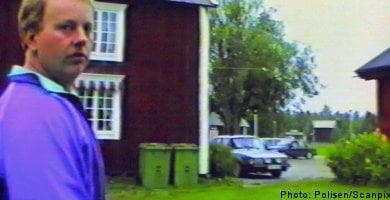 A traffic officer called Eklund to tell him that his car had been photographed in the area where the child disappeared at around the same time a picture was taken of the girl cycling home.

“Photos had just gone out of the girl and a red car. He wanted to call the owner of the red car to hear if he had seen anything. He thought the driver had already been questioned since the pictures were released. We wanted to put out as much information as possible to save the girl,” police spokesman Sten Sabel told Aftonbladet.

But the tip-off meant that Eklund would have had time to dispose of any evidence in his car before being arrested in Hallandsåsen in southern Sweden last Monday night.

Eklund, who has also admitted to killing 31-year-old Pernilla Hellgren in Falun in 2000, has said he does not have any further crimes to confess. National investigators have however said they will see whether the 42-year-old can be linked to any other unsolved crimes.

Eklund has now revealed in detail how he killed the 10-year-old girl. According to Aftonbladet, he claimed that the girl kicked him in the shin.

“He got angry. He said he grabbed her, got her in a stranglehold and started shaking her. Then he threw her in the trunk and drove away,” a source told the newspaper.

Höglund’s dead body was found on Sunday with severe lacerations on a gravel road some distance south of Valbo in north central Sweden.

She had been missing for over a week. She was last seen cycling home from football practice on April 5th. A man testing out his new camera took a photograph of the girl on her bicycle. Shortly afterwards Eklund’s car was caught on camera on the same road.

Eklund was arrested some days later. When police discovered that DNA evidence seemed to linked him to the murder of Pernilla Hellgren, he admitted to killing both the 31-year-old woman and Engla Höglund.

Police received a tip about Eklund last November in connection with their investigation into the murder of Pernilla Hellgren in Falun in the summer of 2000, but the lead was never followed. Prosecutors have begun investigating the police for possible breach of duty.