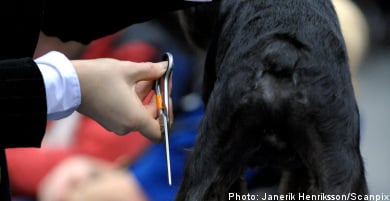 Erlandsson has said that he will work to persuade EU colleagues to follow the Swedish line and introduce a ban on the controversial practice.

Many countries have banned the docking of tails and cropping of ears for cosmetic reasons but the practice remains widespread across the EU.

“Dogs should not be forbidden from expressing their feelings and that is what happens if you cut its tail off,” said Erlandsson to Sveriges Radio on Saturday.

Erlandsson named Denmark, Britain and France as examples of countries where the practice is still common.

There is no EU legislation in the area and that is why Erlandsson has written to his EU colleagues in an attempt to persuade them to work to ban the practice.

Docking of the tail and ears are both procedures which have courted controversy in recent times. Proponents argue that the procedures are not significantly painful and can reduce the risk of infection and prevent future health problems that cause more pain.

Docking of puppies aged less than 10-14-days-old is routinely carried out by both breeders and veterinarians without anaesthesia. Opponents of these procedures state that most tail docking is done for aesthetic rather than health reasons and are unnecessarily painful for the dog.