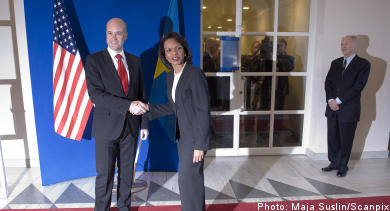 Parts of central Stockholm were sealed off for the meeting in the area surrounding government buildings and the parliament.

Rice was welcomed to the prime minister’s office at Rosenbad at 7.40am. The pair shook hands on the red carpet for the benefit of the assembled ranks of press photographers.

Close to 400 journalists from all over the world have received accreditation for a conference to be held in Stockholm on Thursday to assess the situation in Iraq. Baghdad is expected to request more support for the war-torn country’s sovereignty.

Around 100 delegations are scheduled to partake in the one-day conference, which will be hosted by Iraqi Prime Minister Nuri al-Maliki and United Nations Secretary General Ban Ki-Moon and attended by US Secretary of State Condoleezza Rice and several other high ranking officials from around the globe.

It will be the first follow-up meeting since the International Compact with Iraq (ICI), a five-year peace and economic development plan, was adopted at a May 2007 international conference at the Egyptian Red Sea resort of Sharm el-Sheikh.

At that meeting senior officials from more than 60 countries and organizations promised to cancel 30 billion dollars of Iraqi debt.

Staffan de Mistura, the top UN envoy to Iraq, said this week the Stockholm conference was “of major importance,” insisting this is “a crucial period in the history of Iraq.”

“Either Iraq will become a sovereign, capable, stabilized country, or there will be chaos” in the region, he said.

Maliki meanwhile arrived in Sweden on Wednesday with the hope the conference would garner “support for Iraq’s sovereignty, debt cancellation and settlement of war reparations following the adventures of the former regime,” a statement from his office said.

Swedish Foreign Minister Carl Bildt however maintained debt relief was “not the subject of this conference,” but expressed “cautious optimism” on the progress made in Iraq over the past year.

While Iraq is the focus of the Stockholm conference, much attention is also likely to be paid to the large delegations from the United States and Iran, as tensions rise between the two countries over Tehran’s nuclear programme.

No official meetings have been scheduled between Rice and Iranian Foreign Minister Manouchehr Mottaki at the conference, but Bildt insisted Wednesday “they are interested in talking to each other, I know that.”

While last year’s Sharm el-Sheik conference was held amid a sense of urgency to save the country from chaos, the stakes in Stockholm appear less dire.

Swedish officials have warned not to expect “a major breakthrough,” and Washington has played down expectations ahead of the meet.

“The basic goal is to try and use the efforts of the international community to be able to support the Iraqi government and its own goals for developing the country,” US Deputy State Department spokesman Tom Casey said.

The gathering will be held in a conference centre on the outskirts of Stockholm, and will likely conclude on Thursday evening with a final declaration that will “show the way ahead,” a Swedish diplomat said this week.

Several demonstrations are meanwhile planned across Stockholm and around the conference centre against the continued US presence in Iraq.