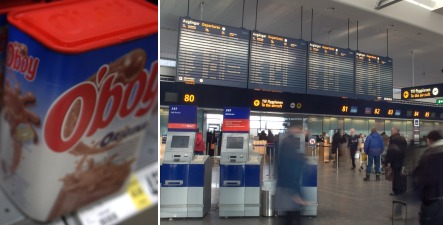 “The bomb technicians shot it up and it contained O’boy,” said Arlanda police commander Jan Sommar to the TT news agency.

O’boy is a popular chocolate drink mix sold in Sweden and other Nordic countries.

Police and bomb technicians were called to Arlanda’s terminal 5, the international terminal, around 9:30am Wednesday after a suspicious object had been discovered near the special baggage check in counter.

A large portion of the terminal was blocked off for several hours, although passenger disruption was minimal.

The incident isn’t the first major bomb-scare blunder in Sweden in recent months.

In January, a concerned janitor called police when he noticed a small parcel moving about in an unusual manner. The bomb squad later discovered that the suspicious device was a vibrating sex toy.

And in late May, a can of shaving cream carried by a contractor worker caused a false alarm at the Oskarshamn nuclear plant. Two men were arrested in the case, as officials feared the men were involved in a plot to sabotage the plant.

Both men were released and no charges were filed.