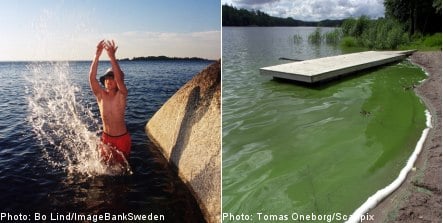 Sweden’s weather agency, SMHI, says that thermometers in several parts of the country may break the 30-degree Celsius mark.

“The only exception is parts of Norrland and the Lappland valleys. There it will be partly cloudy with some showers, but otherwise it looks great throughout the country,” said SMHI meteorologist Lisa Frost to the Svenska Dagbladet (SvD) newspaper.

But the high pressure and accompanying warm temperatures also increase the chances of blue-green algae outbreaks along the Baltic coastline.

“It’s already been seen in Stockholm’s archipelago and in waters of the inner city,” said Gunnar Anneer, a marine ecologist with Stockholm County.

The occurrence of poisonous algae has been at normal levels so far this year, but now with high pressure prevailing, a more serious outbreak can happen quickly.

“The conditions are quite ‘good’ for the algae to increase in the next week. But the weak north east winds will probably keep it from reaching the Swedish mainland yet. On the other hand, there is a risk that accumulations will start to hit land around Öland and Gotland,” said Anneer.

In a report published Thursday, Anneer states that weak surface accumulation of cyanobacteria, also known as poisonous blue-green algae, has been detected from northern Öland up toward Bråvikan and around Gotland.

Weaker accumulations have even been detected near Åland, the archipelago, and in the bays of eastern Finland.

Algae blooms can be quite localized. Even if one bay is affected, an adjacent one can remain free from blooming algae.

The sheltered sides of islands are rarely affected.

People and animals should avoid both swimming in and drinking from algae-infested waters, as doing so can cause itching, stomach sickness, and muscle cramps.

According to Anneer, ingesting such water can even be fatal for animals and pets.