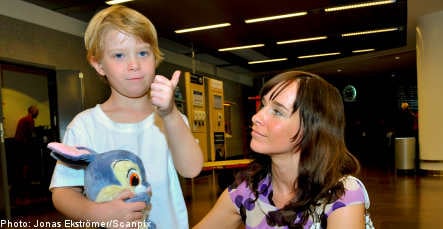 Alicia was reunited with her mother, Maria Elfversson, last Thursday after the arrest of Alicia’s father, Torgeir Nordbo, on Tuesday by Cambodian police.

Alicia has now returned from her year’s exile in south-east Asia and arrived at Stockholm Arlanda Airport to happy scenes on Friday morning.

The Local spoke to Steve Morrish, the executive-director of SISHA which stands for South East Asia Investigations into Social and Humanitarian Activities and works to combat human trafficking and the exploitation of children.

The Local: How was your organisation able to help?

“The family got in touch with us. We have a broad network in Cambodia searching for missing children and this enabled us to help the Cambodian police to find the Swedish girl.”

The Local: Is this a case of human trafficking?

“There are a lot of cases of missing children in Cambodia. Human trafficking is an umbrella term. It has a very broad definition.”

“I place no moral judgement on this case. The Swedish police had a file on a missing girl. We helped to find her. Being able to help reunite her with her family is a great feeling.”

Morrish and Sisha were able to find Alicia by acting on anonymous tip that they received a day after a press conference last Monday held together with Cambodian police and Alicia’s mother.

Maria Elfversson directed criticism against the Swedish authorities when she arrived with her daughter at Stockholm Arlanda Airport on Friday.

“This has taken far too long. Better routines need to be developed,” she said to the assembled media.

Alicia’s 47-year-old father, Torgeir Nordbo, has been on Interpol’s wanted list on suspicion of dealing arbitrarily with a child, for the past year. He has now been arrested and is expected to be extradited to Sweden to next week.