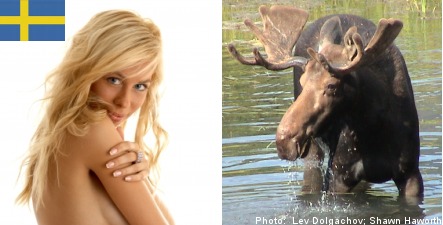 VisitSweden (formerly the Swedish Travel & Tourism Council) asked a group of 1,000 British, German, French and Dutch people for their views on the country as a tourist destination.

Many thought of the cold, the snow, the winter and the high prices. Others answered: nature, countryside and the expansive forests. There was some variation across the nations however with every tenth Frenchman citing the beautiful women and every tenth German noting the (beautiful) elks and the royal family.

VisitSweden is jointly owned by the Swedish government and the tourism industry and is focused on marketing the country to overseas visitors and investors.

“We want to shift the focus of Sweden’s image towards the exotic,” said Thomas Brühl, VisitSweden CEO.

“The Ice Hotel in Jukkasjärvi is a perfect example where the cold, winter and ice is used for something exotic.”

While the French dream of blue-eyed blondes, the Dutch lend their thoughts to Sweden’s profile for peace and freedom.

The Brits, in turn, think of Sweden as a clean country.

Germans, while admiring the magnificent nature from the windows of their caravans, also had time to admire the progressive and modern about Sweden, VisitSweden wrote in a press release.

“That the Germans associate Sweden with elk is probably because they, more than other tourist groups, drive through Sweden. We want to give them that extra spice to their journey and show them the new, exciting Sweden.”

Visit Sweden’s view of ‘the new, exciting Sweden’ is one of gastronomy, culture, fashion and design.

A view shared by Sweden’s agriculture minister, Eskil Erlandsson who, The Local reported on July 22nd, aims to knock France off its gastronomic pedestal and establish Sweden “on the world map as a country of good food.”