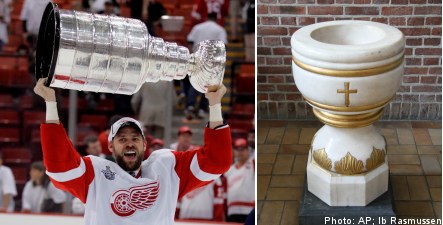 The Stanley Cup is awarded to the team that wins the National Hockey League (NHL) championship.

This year the prize was claimed by the Detroit Red Wings, a team featuring nine Swedish hockey stars, which defeated the Pittsburgh Penguins back in June.

According to tradition, the massive silver trophy gets to spend a day at the home of each of the members of the squad and this July it has been doing the rounds in Sweden escorted by two burly American security guards.

Along the way it has been put to a slightly novel use – as a baptismal font.

First stop was Tomas Holmström in Piteå in northern Sweden. Holmström decided to celebrate his day with ice hockey’s most prestigious trophy by letting his cousin use it for the christening of his seven-week-old daughter Alva Felicia.

“Tomas came up with the idea when we were sitting in the kitchen of his summer cabin a week ago; my wife and I thought it would be fun to christen our daughter in such a priceless object,” Holmström’s cousin, Robert Sundstrom, said to the Canadian newspaper, the Winnipeg Sun.

The only witnesses at the ceremony were the NHL security guards who kept a watchful eye on their precious cargo.

The cup then passed through Detroit Red Wings captain Nicklas Lidström’s home town of Västerås. As far as the media is aware the trophy had a quiet, uneventful day with the holidaying Lidströms.

By the time the Stanley Cup made its way to the south of Sweden and to the home town of Andreas Lilja, it was time for it to be put back into ceremonial use.

Andreas Lilja, following the example set by his team mate Holmström in Piteå, decided to baptize his two young daughters – Maya, 10 months and Tilda, 5 years – in the 89.54 centimetre high trophy, according to Expressen.

The baptism took place at the Andreas Lilja’s family home in Laröd, north of Helsingborg.

“Tilda understands what the Stanley Cup means. When we had a procession with the trophy in Detroit the streets were lined with 1.4 million people. She gets just how big this is,” said Andreas Lilja to Expressen.