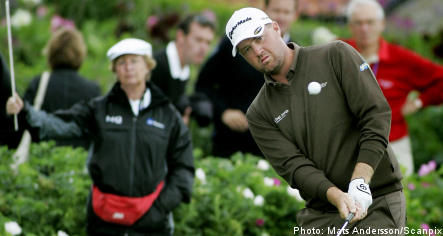 Spain’s Linhart even had three bogies in his round, but a mammoth seven birdies meant he notched up a four-under par round, matching Hanson and Dougherty who had shot the same score earlier in the day.

It was an impressive comeback by Linhart. He dropped a shot at the 11th — having only started on the 10th — but then recouped himself by earning birdies on the 12th, 14th and first holes.

Unfortunately he dropped shots at the second and seventh holes but they were balanced out with birdies at the third, fifth, eighth and ninth to score 31 in the front nine.

Hanson, starting on the back nine, also gave little indication of what was to come when he sandwiched birdies at the 15th and 16th with bogeys at the tenth and 18th, but then his fortunes changed.

He followed a birdie at the first with another couple at the fourth and fifth. A run of three straight pars then followed for the Swede before he wrapped up an inward nine 30 with a birdie at his last hole.

England’s Dougherty, 15th in the European Ryder Cup standings, joined Hanson on four under after a flawless round containing two birdies and an eagle.

“It’s been a long while since I’ve had a round with no bogeys,” Dougherty said. “I had plenty of them last week, that’s for sure.” He had rounds of 77 and 82 at the US PGA Championship.

“I’ve not played a good round in what feels like forever, but I played some really really great golf there.

“You’ve got to turn the corner somewhere, so hopefully this is where it starts.

“Even if I win here I’m not going to be in the team, but I believe I still have an opportunity to make the side (in the next two weeks).

“If I don’t make it, though, I won’t feel disappointed with myself. I’ve done what I can and playing is fully acceptable.”