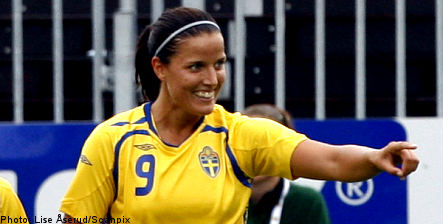 Johanna Almgren met her idol, Brazil and AC Milan superstar Ronaldinho, when the Swedes shared a hotel with the Brazilian national team before one of their matches at the Olympic games.

Almgren, a late replacement for the injured Hanna Ljungberg in the Swedish women’s football team, told home town newspaper Borås Tidning that when the Brazilian team arrived at the hotel the staff and guests gave them a round of applause.

Little did Almgren know at the time that she would get a closer look at Brazil’s dashing midfield maestro.

“We rushed to the hotel foyer to collect autographs. Ronaldinho ignored all the Chinese and walked straight towards me. He looked me deep in the eyes, took my hand and kissed it. I almost fainted,” said Almgren in a meeting with fans after her return from Beijing last week.

But that proved to be only the beginning to Johanna Almgren’s flirt with her idol and later that evening the phone rang in her hotel room.

“Somebody said in broken English that he was calling on behalf of Ronaldinho. Ronaldinho wanted me to come up to his room.”

Almgren initially dismissed the call as a prank from her team mate Therese Sjögran. But when it emerged that the call was deadly serious the smitten Swede dug out her camera, assembled a couple of trusty chaperones, and headed up to meet one of the world’s biggest sporting stars.

“Unfortunately he (Ronaldinho) can not speak much English. My Spanish and Portuguese are appalling and so the conversation consisted of mostly sign language,” said Almgren.

The pair showed however that nothing was lost in translation when Ronaldinho turned to one of his team mates and began speaking in Portuguese.

“The interpreter said that Ronaldinho asked if I would like to marry him. I was shocked and replied immediately: No!”

Johanna Almgren showed no sign of regret for having rejected the Brazilian playboy’s overtures when talking to her own fans at home in Borås on Friday.

“I have my Adam here at home. Although it took some time to placate him after I told him about the meeting with the Brazilians,” Almgren laughed.