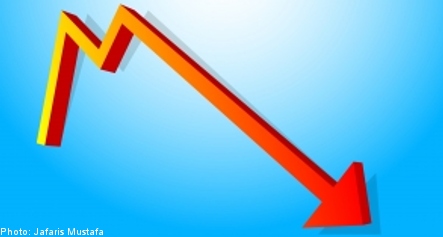 “We judge that we are now entering into a period of contraction. But it won’t be as steep a drop as in 2001/2002,” said NIER head Mats Dillén to the TT news agency.

NIER expects Sweden’s GDP to rise by only 1.4 percent in 2008, half of last year’s growth rate.

The research group also doubts that the Riksbank will raise interest rates in September, despite the bank’s hints about plans for several rate increases.

NIER forecasts the Riksbank’s main interest rate, the repo rate, to stay at 4.5 percent at the end of 2008, before falling to 3.75 percent the following year, followed by an additional drop to 3.5 percent in 2010.

Employment is expected to drop next year, particularly in the manufacturing sector, leading to a rise in joblessness.

But by 2010, a recovery in the international economy, combined with rates cuts and an expansionary monetary policy at home, should cause Sweden’s economy to start rising again, according to NIER forecasts, which put GDP growth at 3.0 percent in 2010.

While the institute believes public finances may weaken slightly, it forecasts that the state’s coffers will remain relatively strong, leaving room for new reforms totaling 35 billion kronor ($224 million) in 2009 and around 30 billion in 2010.

According to NIER, inflation expectations among Swedish households fell to 2.9 percent, down from 3.7 percent the month before.

Jan Häggström, lead economist with the Handelsbanken banking group, was surprised by the sharp drop in inflation expectations, citing the possibility that households had taken note of dropping oil prices as an explanation.

“I believe the Riksbank will raise interest rates in September, but then there won’t be any more rate increases,” said Häggström.

“The Riksbank is also going to changes the direction of its interest rate policy, which means that they will send signals for a lower repo rate next year.”

According to NIER’s latest monthly report, the mood of the Swedish economy grew even gloomier in August.

The institute’s Economic Tendency Indicator, which measures business and consumer confidence in the economy, fell from 88.5 in July to 85.5 in August, the lowest level since July 2003.

Sentiment remains much weaker than normal and all sectors surveyed.

After two and a half years of rising employment, the number of people employed in trade and industry is now thought to have dropped somewhat and companies’ plans for the coming months indicate more cuts are on the way.