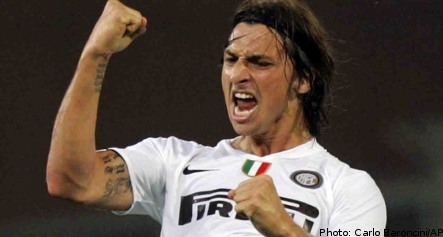 Zlatan Ibrahimovic gave the visitors a first half lead but Samp fought back after the break to earn a point through Gennaro Delvecchio.

Mourinho will not have been happy that his team surrendered a lead but the differing aspirations of the two sides were apparent after the final whistle as Inter trudged off the pitch while Sampdoria celebrated as if they had won silverware.

The Portuguese coach did not seem too upset after the game, though.

“The result was fair because we weren’t able to close out the match but a draw at a difficult ground is not a big drama,” he told Sky Sport. “I’m not super happy but the team didn’t play badly.”

Mourinho sprung a surprise by picking Argentina midfielder Esteban Cambiasso at centre-back while he opted for his favoured three-pronged attack, with Swede Ibrahimovic flanked by Brazilian Alessandro Mancini and Portuguese veteran Luis Figo.

Mourinho still wants to add Ricardo Quaresma to his squad to play on the wing but admitted that may not happen now.

“I expressed my (transfer) desires several months ago but with respect to the club if the decision to not bring them is taken it will come from the president (Massimo Moratti),” said Mourinho.

“I need a quick player on the flanks, my choice was Quaresma but Porto aren’t selling the player, it’s not a big problem.”

Sampdoria’s Italy wild boy Antonio Cassano had the first effort on goal on six minutes but he failed to hit the target.

Inter gradually took control of the match and opened the scoring in controversial fashion on 33 minutes.

Ibrahimovic ran onto a flick from Mancini and took the ball down on his chest before scuffing a left-footed shot in off the post but television replays showed that he controlled the ball with his arm as well as his chest.

Despite the first half lead, Mourinho did not look impressed and often cut an impassive figure on the touchline.

However he was soon irked after the break following some sustained Sampdoria pressure as the home side equalised.

Substitute Marco Padalino crossed from the right for Daniele Franceschini who failed to make proper contact with a stooped header under pressure from Maicon but the ball fell kindly to Delvecchio who prodded home on 68 minutes.

Moments later and Cassano should have done better when sent free by a long ball but with a free run on goal he got the ball stuck between his feet, allowing Marco Materazzi to get back and clear.

That was the final incident of the game as the match finished 1-1 and Mourinho went back to the drawing board to make sense of his first taste of Serie A football. He can at least be sure in the knowledge that at least one thing remains unchanged from last season – Ibrahimovic knows where the goal is.