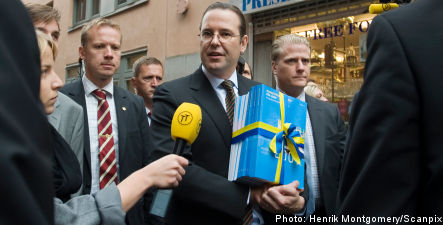 “We’re tacking today’s problems by equipping Sweden for the future,” said Minister of Finance Anders Borg as he initiated discussion of the autumn budget in front of the Riksdag.

Borg acknowledged that Europe, and hence Sweden, are being affected by the current global economic slowdown to a greater extent than originally anticipated.

Nevertheless, he remains confident about Sweden’s ability to weather the deteriorating macroeconomic environment, believing the country can still afford to carry out a number of reforms.

“Our position is stronger than that of most other OECD and EU countries. We will now take advantage of this to respond to a poorer outlook in the wake of growing unrest in the financial markets, while providing increased resources to education, health care and social services, and other areas,” said Borg in a statement.

Borg followed time-honoured practice in presenting the budget by walking the document from the Ministry of Finance through the streets of Stockholm over to the Riksdag, with a large press contingent in tow.

Despite the commotion caused by the throng of reporters, Borg insisted to the TT news agency that he had no plans to break with tradition.

“So far it seems that everyone has managed to keep their feet, no one has tripped up in the crowd,” he said.

In addition to proposals for increased spending on higher education, entrepreneurship and crime fighting, the budget also allocates 900 million kronor to help newly arrived immigrants establish themselves in Sweden.

The government also plans to spend an extra 15 billion kronor on research and development in the next four years, with a focus on medicine, technology and the climate.

Welfare reforms included in the 2009 budget include tax cuts for pensioners worth 2 billion kronor, and additional 650 million kronor a year over the next three years to improve Sweden’s psychiatric care.

The government also wants to introduce a performance guarantee into Sweden’s health services, and plans to spend 1 billion kronor a year starting in 2010 to help improve overall care and reduce wait times.