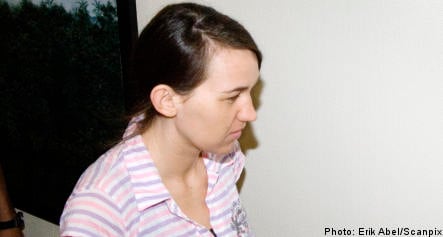 The Västmanland court said in August there was “convincing evidence” that 32-year-old Christine Schürrer was guilty of the crimes.

But it held off presenting its verdict until a psychiatric evaluation had been conducted to determine whether she should be sent to prison or a psychiatric hospital.

There was “therefore no medical reason to commit Christine Schürrer to psychiatric care.”

Schürrer has been charged with “using a hammer or a hammer-like object” to bludgeon to death a nearly four-year-old boy and his almost two-year-old sister on March 17th in the small Swedish town of Arboga. She has also been charged with attempting to kill their 23-year-old mother, Emma Jangestig.

Jangestig is the live-in companion of a man Schürrer once dated.

The prosecution argued during the trial that Schürrer “had not got over the split from (him), still had feelings for (him) and was hurt that (he) was living as a family with Emma Jangestig and her children.

Schürrer denied all wrongdoing during the trial, which dominated headlines in Sweden and Germany in August.

According to Swedish news agency TT, Schürrer refused to cooperate with doctors for the psychiatric evaluation.

The Västmanland court is scheduled to reconvene to discuss the case on October 8th.

The verdict could be announced on that date at the earliest, a court clerk told AFP on Thursday.