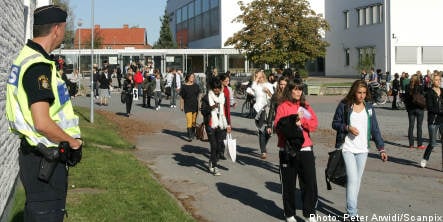 “At around 10am, a note was discovered at the school in which someone had written they were going to shoot up the school,” Börje Strömberg, a spokesman for the regional Västmanland police, told AFP.

“A little later a second threat was found, and the headmaster decided to evacuate the school and send everyone home.”

The threats against the Carlforsska high school in Västerås, 100 kilometres west of Stockholm, came two days after Matti Juhani Saari, 22, went on a murderous rampage at his vocational school in the Finnish town of Kauhajoki, killing nine classmates and a teacher before turning his gun on himself.

“It is not unusual for there to be threats like this right after something like the shooting in Finland happens,” Strömberg said.

The Carlforsska high school was one of several Swedish schools temporarily closed due to threats after another Finnish school massacre last year, he added.

Police deemed that Thursday’s threats to be “not serious,” Strömberg said, “but I understand that the headmaster was worried.”

Police in the region arrested a 16-year-old boy on Wednesday after discovering videos he had posted on YouTube showing him holding a gun and making threatening statements, Strömberg said.

“He is still in custody. We want to determine how serious the threats he posted on the Internet were,” he said, adding the threats had been “of a general nature” and were not directed at the boy’s school.

In the days before the Kauhajoki massacre, Saari posted several videos on YouTube of himself shooting a handgun at an outdoor firing range.