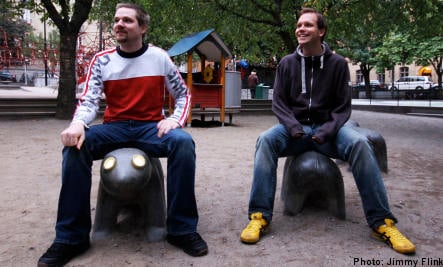 The guys behind controversial file-sharing site The Pirate Bay have been called many things. Mostly they don’t care, but when people, especially representatives of the media, want to slip them into the tights of Robin Hood, they refuse to cooperate.

“Everyone wants to label us as a modern Robin Hood: the Robin Hood of the digital age. I hate that expression,” says Peter Sunde, one of the key figures of The Pirate Bay (TPB).

Pre-conceived notions abound when it comes to the Sweden-based file-sharing site.

But contrary to popular belief, The Pirate Bay’s leading lights do not spend their days cooped up in clandestine cellars plotting the downfall of the copyright society, as was revealed over the course of half a day in Stockholm in the company of Sunde and founder Fredrik Neij.

Polite, humorous and down-to-earth, the two guys – who each recently turned 30 – speak patiently about their hobby.

“We believe in freedom of speech and the right to free communication between private individuals,” Sunde says.

“It seems as if many people have a hard time understanding that we have created a forum for information sharing; we’re not actually posting any of the material on TPB ourselves.”

The Pirate Bay has been accused of stealing from artists, cheating big corporations of trade secrets, and they are due in court some time in 2009 to face charges of copyright infringement involving music, movies and computer games.

Clearly there is a demand for what they have to offer: The Pirate Bay’s file sharing system plays host to 12 million unique visitors at any given time and the system gets four billion hits a day, says Sunde.

People upload movies, music, games and other content that can be shared electronically. This, some say, is illegal, but Sunde, Neij and the others involved in TPB are challenging the accepted rules.

“The idea is to enable anyone and everyone to share information, no matter what type of information, to whomever they want without being censored or moralized over,” Sunde explains.

“We try to let people understand the good things ‘pirates’ can do (we use the name ‘pirates’ to reclaim the word and make it positive) and to put the power of people in their own hands instead of the traditional media industry that edits the content that is out there.”

The most recent controversy surrounding The Pirate Bay involved uploaded autopsy photos of two murdered Swedish children. Sunde and Neij fully understand the heart-wrenching nature of the material for the family but say the photos were part of a public document posted by a user and they are determined not to censor TPB.

They do remove some content from the site however, Neij says. Around a dozen computer-savvy volunteers help moderate TPB.

“They remove spam, viruses and fakes,” Neij says. “And if something comes up that breaks Swedish law, something that looks like child pornography, for example, they send it to the police so they can decide.”

Sunde, who handles most of the press relations, has tried to explain to various media that it wasn’t them, the operators of TPB, who posted the autopsy photos.

Most headlines and reports about the photos of the murdered children failed to mention that the photos were part of a 2,700 page murder investigation, says Sunde.

“We get accused of publishing information that we have nothing to do with, all the while the newspapers and TV channels get higher ratings,” Sunde says. “You wonder who’s really making out on that deal.”

The Pirate Bay is not a profit-driven enterprise, Sunde explains. Sunde and Neij both have day jobs as IT consultants (surprise, surprise) to support themselves. TPB accepts donations and gets advertising money, which is used to pay for broadband and new computers.

“We are happy as long as it doesn’t make a loss,” Neij says.

TPB is not a registered business, not even an organization, Sunde explains. “It’s just a hobby that’s grown to be very, very large.”

So large, in fact, that companies and organizations around the world routinely invite The Pirate Bay operators to speak about their topic of expertise. Soon they are travelling to Malaysia to give their lecture, cheekily entitled: “How to dismantle a multi-billion dollar industry as a hobby.”

Of course, the topic does not go over well with everyone. The verbal wrath of Hollywood and various major record labels around the world is posted on The Pirate Bay web site under ‘legal’, a link that takes the curious to letters from global corporations such as DreamWorks and Apple.

The responses from Sunde, Neij and the moderators are posted under the same link. Some are pretty straight-forward, and most responses include explicit language.

Though busy juggling various projects — including publishing a book, holding an art exhibit in Italy, consultancy work and active involvement with the Piratbyrån (The Pirate Bureau) lobby group, which advocates copying and sharing information and culture freely — Sunde and Neij still find time for other hobbies. They travel a lot, for example.

When asked about their favourite travel destination, both answer: the Sinai Desert.

“We go there a lot, we know a Bedouin,” Neij says. He shows pictures on his cell phone of a long beach, a tent-like dwelling and azure blue water.

“This is the only place I can really relax,” he adds.

Sunde and Neij agree that The Pirate Bay story is difficult to encapsulate in one sitting. This is where documentary film maker Simon Klose comes in.

“We met during a demonstration and I thought: ‘Who are these guys? Are they baby-eating monsters or what?’ They piqued my curiosity,” he says.

Klose, who has also worked on movies about homeless people in Tokyo and car thieves in Johannesburg, says he is now making a documentary about “hackers in Stockholm.”

“It’s kind of an interesting situation,” he says. “This is the first time I’m making a documentary where I’m pretty sure that Hollywood will watch it.”

Favorite food: Pasta, the way I make it (Considers himself a great cook)

Idol: I respect a lot of people, but have no particular idol

Something you don’t think people know about you: I used to be a real good soccer player.

Something you don’t think people know about you: A lot, I hope.