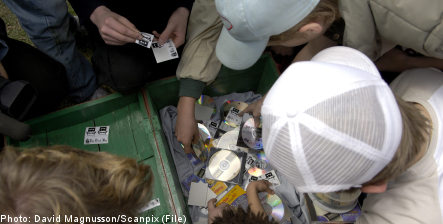 Forces are mobilizing quickly in a determined effort to defeat the measure, with 16,000 members having joined a group called Stoppa IPRED (‘Stop IPRED’) on the Facebook social networking website .

The group, which references the acronym for the European Union’s Intellectual Property Rights Enforcement Directive on which the proposed legislation is based, is adding 1,000 new members a day and has already begun bombarding Riksdag members with emails protesting the measure.

Christian Engström, vice chairman of the Pirate Party and one of the founders of the Facebook group, is pleased with the number of people who have joined the group, but remains concerned about the bill, which would make it easier for law enforcement officials to hunt down those suspected of illegally downloading and sharing copyrighted material.

According to Sweden’s proposal, copyright holders would be allowed to get a court order requesting the release of information about certain IP addresses if there is probable cause that someone has broken copyright laws.

“Regardless of what you think of file sharing, it’s wrong to leave police work up to private companies,” said Engström, who also expressed fears that regular families in Sweden would likely start receiving threatening letters from record companies.

Engström believe families which are completely innocent will end up paying whatever record companies demand in order to avoid the risk of losing in court and being forced to pay even larger sums.