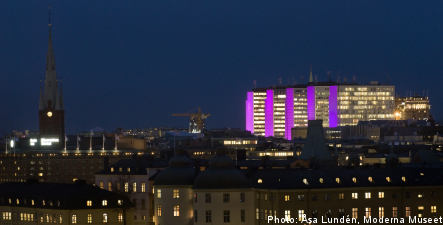 Earlier this week, the project received both a silver and gold distinction at the London International Awards, an international competition recognizing exceptional creative work in advertising, design, and digital media.

For the second year in a row, artist Erik Krikortz has invited the city’s inhabitants to participate in his Emotional Cities lighting exhibition.

Anybody can register their current emotional state by answering the question “How are you today?” on the website www.emotionalcities.com.

Visitors to the site report how they are feeling using a scale of seven faces, from frowning to smiley, each coloured to represent a point on the spectrum from violet (sad) to red (happy).

The shade of the lights projected on the facades of the five towers at Hötorget changes according to how Stockholmers rate their mood on the website. A median value is calculated for the city, which in turn determines the lights’ colour.

“’How are you?’ is an unbelievably simple but important question that is often thrown around rather carelessly. With Emotional Cities, I want to contribute to a collective discussion about how we are feeling. The idea is that people should ask themselves how they are feeling, but also how others around them feel and our state of well-being as a whole,” says Krikortz.

He says that Emotional Cities is an experiment, not only in exploring the crossroads between art and psychology, but also as a hybrid between different media and modes of expression.

“Light is a fantastic medium for communication and to tie together the Internet with the urban environment,” he says.

“Art most often occurs in closed spaces, but I think it should be available for the public…That’s why I always try to work in public spaces, both on the street and online. In addition, the city needs more art and decent architecture as a counterweight to all of the advertisements around us.”

He adds that the participation of the public is what makes Emotional Cities special.

“How the work of art is used is the deciding factor for its content and development. I hope the project will awaken your care for yourself and others, and contribute to the reflection over life.”

Emotional Cities is on display at Hötorget from 1 November 2008-28 February 2009. Visit www.emotionalcities.com for more information.