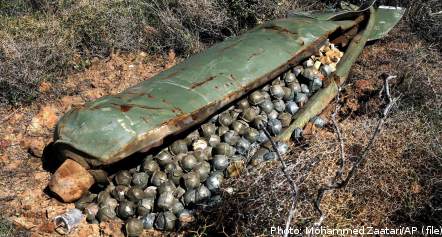 Prime Minister Fredrik Reinfeldt confirmed Sweden’s intention to join the over 100 countries signing up to the treaty to Sveriges Radio’s Ekot news program.

The decision signals the end of the manufacture of Bomb capsule 90, a munition included in the weapons equipping the JAS Gripen fighter aircraft.

“We need to phase it out of our weapons stock,” Reinfeldt said.

111 countries negotiated the treaty in Ireland’s capital Dublin in May. The British prime minister Gordon Brown described the treaty at the time as “a big step forward to make the world a safer place.”

However leading arms manufacturers and stockpilers – the USA, Russia, China and Israel – declined to take part in the treaty talks and have declared their opposition to the move.

A cluster bomb consists of a bigger container which opens in mid-air spreading hundreds of smaller “bomblets” or sub-munitions over a wide area. Many of the bomblets do not explode immediately and therefore pose a danger to civilians long after a conflict has ended.

The bombs have been used in countries including Cambodia, Kosovo and Afghanistan. Israel are known to have used the weapons in their assault on Lebanon in 2006.

Sweden’s delay in signing up to the treaty has come in for criticism from peace campaigners.

“They have taken a long time and should have been able to take a stand much sooner. But of course we are very happy. This is a significant step forward for international work to ban cluster bombs,” said Anna Ek of the peace group Svenska Freds.

Reinfeldt explained Sweden’s delay in signing the treaty in that time was required to have the issue considered by the defence forces. They were also charged with the task of developing a cost analysis for an alternative weapon.

The defence forces have stated that an alternative will probably cost more than the cluster bomb.

The prime minister compared the cluster bomb treaty to Sweden’s signing of the landmine treaty in 1999. The two decisions are part of Swedish disarmament ambitions, he explained.

The landmine treaty has neither been signed by Russia, the United States, Israel nor China however none of the countries have used the weapons since the treaty was negotiated in 1997.

Campaigners are hoping that the resounding message sent by the signatories to the cluster bomb treaty will have the same effect.