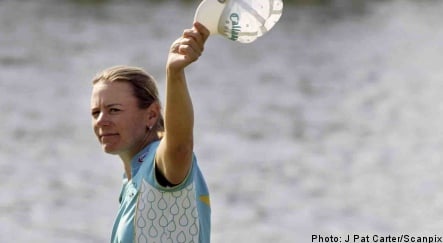 The ending for Sörenstam came a bit sooner than anticipated as she bowed out of the season-ending USLPGA ADT Championship after Friday’s second round.

her storied career that she ever imagined.

“It’s almost that a tear wants to come out, but it’s not really coming out,” said Sörenstam, who shot a three-over 75 on Friday to finish in a tie for 18th. “I think it’s because I’m very happy with what I’ve done. You know, I’m content. I’ve said it all along, I feel good.”

The field was cut to 16 players after the second round with Aussie Katherine Hull atop the leaderboard.

“I had really two good chances there (on holes 14 and 15), and when you don’t make those, you know it’s going to be very hard,” Sörenstam said.

While Friday’s round wraps up her American career, the 38-year-old Swede is scheduled to play her final tournament in Dubai next month.

The owner of 72 LPGA wins and 10 major championships, Sörenstam announced in May that she had decided to end her Hall of Fame career and pursue other interests.

“I don’t think just a few words would summarize how I feel or what I’ve achieved or what I’ve gone through in experiences.”

Sörenstam won three times on the LPGA Tour this season and has said she has no regrets about moving on.

She also stated that she wants to start a family and pursue other business interests, including her golf academy in Florida.

“But I guess it will come for all of us at one point. So we can only say that we enjoyed having her, and thank you for everything.”

Sörenstam is leaving the LPGA just when the tour seems to need her most.

The global economic crisis has taken a big bite out of the budget as organizers announced this week they plan to slash prize money by over five million dollars in 2009.

With sponsorship money dwindling, officials also plan to cut the number of tournaments from 34 to 31 next season.

The players have also had to deal with a new steroid and performance-enhancing drug programme for the first time in 2008 and the implementation of a English language proficiency policy next year.