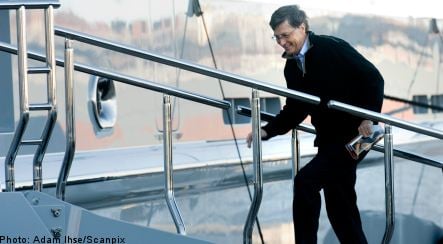 Gates arrived in Sweden on Friday in time for the start of the three day wedding celebrations for old friend and Microsoft colleague Charles Simonyi (60) and his 28-year-old bride-to-be Lisa Persdotter.

Gates was accompanied by a bevy of beefy Danish bodyguards as he passed through Copenhagen’s Kastrup airport en route to the glitzy wedding to be held at the German church in Sweden’s second city.

“There is a bodyguard at every entrance to the church,” according to GT/Expressen’s reporter Johan T Lindvall.

The weekend will not be all champagne and canapés for the Microsoft billionaire however as he has been appointed as one of the ushers for the service which will begin at 2pm on Saturday.

With security tight, Gates, the happy couple and the other key figures in the ceremony were taken through their paces for the rehearsal on Friday afternoon.

All the details of the rehearsal were completed in time for the weekend’s festivities to begin with a reception at Gothenburg’s art museum on Friday evening. Gates arrived early and told the assembled media:

“It feels great to be here,” on being asked what it was like to be in Sweden.

The star-studded guest list is expected to include Ace of Base star Ulf Ekberg as well Mick Jagger of the Rolling Stones.

Simonyi and Swedish socialite Lisa Persdotter were engaged on 08/08/08 in the romantic setting of St.Tropez in the south of France.

Simonyi, like Gates, is an active philanthropist and is known as something of a jetset billionaire.

His jetset lifestyle has not only been limited to the planet Earth and Simonyi caught the headlines last year when he spent 13 days in outer space on a trip that set him back a modest $25 million. He is preparing for his second trip into space, in 2009, that will make him the first tourist to make a return journey into the great beyond.

Charles Simonyi has been described by British scientist Richard Dawkins as “a sort of combination of International Renaissance Man, Playboy of the Scientific World, Test Pilot of the Intellect, and Space-age Orbiter of the Mind as well as of the Planet.”

Dawkins was the first to hold the chair of the Charles Simonyi Professor of the Public Understanding of Science at Oxford University, created by Simonyi in 1995.

Until he fell in love with the Swedish beauty Lisa Persdotter last autumn Simonyi had been in a 15-year-long relationship with US television personality Martha Stewart.

Persdotter is known to have come from a privileged background, has studied in Edinburgh and New York and is currently employed as an investment manager. The family have known Simonyi for a long time as they own neighbouring properties in St.Tropez.