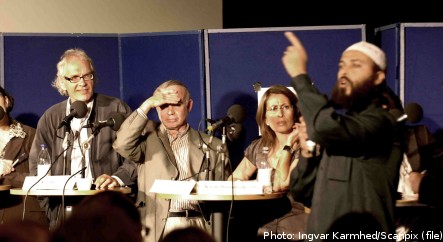 Meanwhile, an exhibition of his Muhammad caricatures has been blocked by Kalmar Art Museum.

At a panel discussion after the premiere of the musical – a filmed documentation of events occurring after the drawings of the Muslim prophet Muhammad as a roundabout dog, chaos reigned on Saturday.

When Vilks stood to address the several hundred people gathered in the ABF building in Stockholm, a young woman rose to her feet, made threatening gestures with her key ring and screamed at the artist.

One of the debate’s organizers seized the woman in order to escort her from the premises.

“She then scratched her keys over his underarm, cutting him in two places,” said Filip Björner for the event’s organizers, the Swedish Humanist Association.

According to Björner the association had reached an agreement with the police to deal with any demonstrators gently. The woman was therefore allowed to join other demonstrators outside the building in central Stockholm.

But after the woman was removed from the debate, another woman swiftly took her place. She was permitted to participate in the debate and took the opportunity to verbally abuse the co-organizers, the Ex-Muslims, a group known internationally as “Muslims for Christ.”

After the conclusion of the debate, Vilks was obliged to leave the building by the back entrance in the company of a police escort.

Furthermore, local media reported on Saturday that a retrospective exhibition by Vilks had been stopped at Kalmar Art Museum.

The move has caused controversy as the museum’s board overruled a decision by the head of the museum, Clas Börjesson, and the museum’s curator, to support the exhibition.

The head of the museum’s board, Sven Lindgren, denies that Börjesson’s authority has been undermined.

“As a rule we should not get involved but in this instance, and with a new art museum which has attracted a great deal of attention, it is important to be careful with the exhibitions that are chosen,” he said to Sveriges Radio Kalmar.

Lindgren denied that the decision was made due to fears over the consequences of showing the controversial artist’s work, and explained that it was a question of quality.

He argued that Vilks’ work simply displayed insufficient artistic quality to be shown at the Kalmar museum.

Vilks became known in August 2007 when he joined a controversy started in Denmark two years ago over the depiction of the Prophet Muhammad, a practice forbidden and considered blasphemous in strict interpretations of Islam.

Vilks’ cartoons of the Prophet Muhammad as a “roundabout dog” were published in a number of Swedish newspapers, including regional daily Nerikes Allehanda, and caused a storm among Muslim groups in Sweden and abroad.

Undeterred by a slew of death threats, Vilks began working on a musical about the controversy, a move he explained at the time to Dagens Nyheter:

“It is part of the rules of the game to be able to criticize religion and politics. It is nothing personal and I do not have it in for anyone.”

Vilks intends for the musical Dogs to have further showings but has said that he expects interest to wane and the attendant controversy to ease with time.

“Looking at the bigger picture, you should see that something is happening. The more cartoons and drawings are made, the less interesting it will be. In the end people will get used to it,” Vilks told The Local in March 2008.