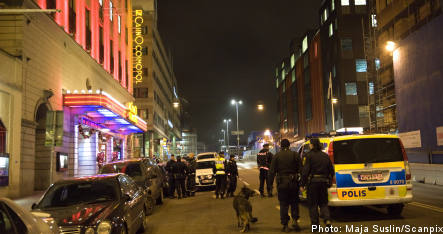 Two guests and a bouncer were taken to hospital with gunshot wounds, according to the police.

“One was hit in the arm, one in the leg and one in the stomach, according to the information we have received,” said police spokesman Janne Hedlund.

All three were taken to St. Görans hospital in central Stockholm. The extent of their injuries is not yet known.

“We have sixteen or seventeen police units out searching for the perpetrator,” said spokesman Magnus Axelsson.

According to the doorman who alerted the police, a man opened fire with a handgun after he was denied entry to the casino.He then walked away from the scene.

Following an examination of security footage, police described the perpetrator as male, 1.80 metres (6 feet) tall, with short cropped fair hair. He was wearing a black jacket with a logo on the upper arm, blue jeans, black shoes and white socks.

Witnesses at the scene also reported that he spoke broken Swedish. Janne Hedlund said his age was unknown.

“But we have received information that he jumped into a taxi. So we are currently checking with all major taxi companies,” he said.

Around 300 people are believe to have been at the casino at the time of the incident. Police have cordoned of the area around the casino, which is located on Kungsgatan in the city centre.