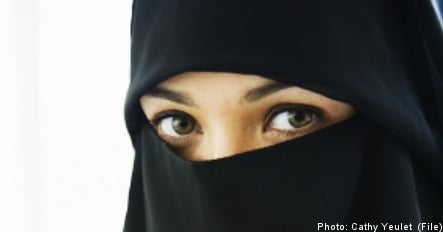 The woman was told on January 15th that she was no longer welcome at Västerort Vuxengymnasium, an adult education college in Spånga, if she persisted in wearing her niqab. The niqab is part of a hijab headress and covers the entire face except for the eyes.

The woman has now reported the matter to the Equality Ombudsman (DO) alleging discrimination.

In her report to DO dated January 20th, the woman alleges that she was told that she could not wear her niqab in class or in contact with the school’s staff.

The woman explains that the school justified its decision by referring to a recent decision by the National Agency for Education (Skolverket) which banned the wearing of some Muslim headscarves in class.

“But this is just a ruling, it is not a law and the ruling concerns those who wear a burqa, covering the whole face. I have a niqab which shows the area around the eyes,” the woman argued.

The woman writes that she finds it “offensive” to be expelled for her “personal style” and argues that the ruling is confusing as some schools permit the niqab.

But the college’s rector, Britt-Marie Johansson, has defended the school’s right to exclude the student from classes, referring to the education agency’s ruling.

“At Västerorts vux it is not allowed in the classroom to cover one’s face, with a veil or similar. This rule also applies in contact with staff. This means that neither a niqab nor a burqa can be worn.”

According to Johansson, the choice facing students is thus clear.

“Accept the rules stated above or discontinue your studies.”

But the student is keen to continue her studies and claims that she has offered the school a compromise.

“I have said that I can sit at the front of the class, and remove the niqab during classes and to identify myself.”

“I have even spoken to the men in the class…and they have said that it doesn’t bother them.”

The student argues that freedom of religion is enshrined in law in Sweden and this should take precedence over the education agency ruling.