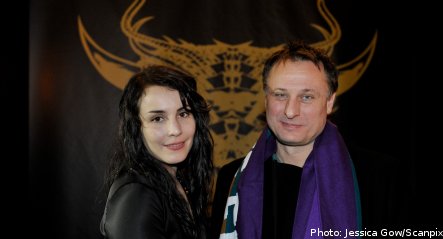 “We have sold 30,000 tickets for today (Friday) and 75,000 for the week,” through next Friday, said Thomas Runfors, a spokesman for Sweden’s main cinema chain SF.

“It is really exceptional for a Swedish film,” he told AFP, adding that the movie would be shown in 160 SF cinemas around the country.

Larsson’s trilogy has been translated into more than 30 languages and sold more than 10 million copies worldwide.

The popularity of the books stand in stark contrast to the author’s tragic fate.

Larsson, who worked as a journalist in Stockholm, died in November 2004 of a heart attack, aged 50, a year before the trilogy was published.

The film opening in Swedish and Danish cinemas on Friday is based on the first book, “The Girl With the Dragon Tattoo,” and has been directed by acclaimed Danish director Niels Arden Oplev.

It follows Mikael Blomkvist, an investigative reporter, and Lisbeth Salander, a feisty rebel hacker-turned-detective, as they search for Harriet Vanger, the niece of a business tycoon who disappeared at the age of 16 four decades earlier in northern Sweden.

“The movie is really great. It is exactly like the book,” Cajsa Falk, 38, told AFP after seeing one of the first screenings in Stockholm.

“It is very exciting and Noomi Rapace is just like Lisbeth Salander,” she added.

“The film was quite good. I am very touched by this story. I’m happy,” agreed 65-year-old Agneta Langlet, standing in front of a wall plastered with posters advertising the film.

The movie, shot like a Hollywood thriller but with Sweden’s icy winter landscapes as a backdrop, is due out in Norway on March 13th, in Finland on March 27th and in France on May 13th.

It is also due out soon in Belgium and the Netherlands.