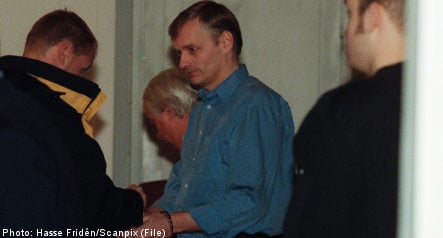 Mats Rimdahl appeared in Lübeck district court charged with receiving stolen goods and counterfeiting official documents as well as a string of motoring offences connected with the chase.

The Lübeck state prosecutor says he had fake police and legal identification with him when he was arrested after the terrifying car chase.

“You could really say the car chase was like something from a film. People were throwing themselves out of the way,” a prosecutor spokesman told The Local. “One woman was with her little girl who was riding a bicycle.”

“The woman was hurt when she flung herself out of the way and her daughter was slightly injured when she fell off her bike. It could have ended in tragedy – they were very lucky,” she added.

The 52-year-old Swede, who the spokesman said had an address in Stockholm, is alleged to have collected the stolen Porsche Cayenne from thieves who had taken it in Stockholm last October. After putting false number plates on it, he headed for Lübeck where, the authorities claim, he wanted to sell it for around €80,000.

“The German police had been told about the stolen car by their Swedish colleagues and set up a checkpoint to stop it,” the spokesman said. “But he fled and drove through town at more than 140 kilometres an hour at times.”

While speeding through town pursued by 24 police cars, he is said to have ignored traffic regulations, running red lights and driving more than half a kilometre on the pavement, forcing pedestrians to run for their lives.

The chase continued, and it was only after nearly an hour, when Rimdahl was heading out of town, that police formed a roadblock with their cars, and rammed his Porsche to bring him to a halt.

When they arrested him, the German police then discovered Rimdahl had already served long prison sentences in Sweden for kidnapping, car theft and armed robbery. He was last released in 2006.

Rimdahl, a former naval officer, is known in Sweden as the leader of Maskeradligan (the fancy dress gang), a criminal organisation notorious in the 1980s for a string of spectacular robberies always carried out while in disguise.

The case continues, with another hearing planned for April 29rd when witnesses will be heard.