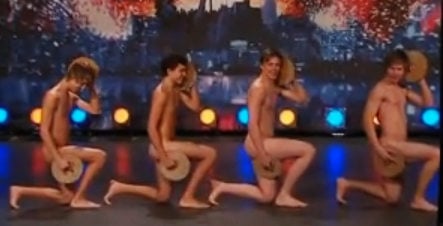 Celebrity scandalmonger Perez Hilton has described the naked crispbread dancing prowess displayed by the four boys from Borlänge as “one of the best Talent auditions ever.”

A video excerpt from TV4’s Talang 2009 (Sweden’s Got Talent) had already been viewed more than a quarter of a million times on Hilton’s website at the time of writing.

Friday’s performance left the Swedish studio audience in tears of laughter as the poorly choreographed quartet struggled manfully to cover up their rude bits with rings of wholesome crispbread.

But when one of the young men eventually lost the struggle to keep his ring intact, a presenter was quickly on hand to toss him a new one.

The boys were cleared to advance to the final audition by a unanimous jury amid calls for an encore from a jubilant audience,