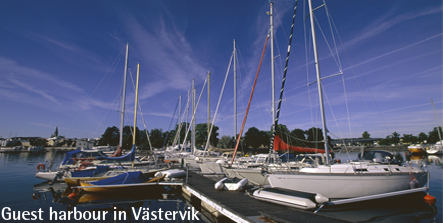 Comprised of over 5000 islands, teeming with wildlife and studded with fantastic restaurants, stores and architectural treasures, Västervik’s archipelago is considered one of the most beautiful is Sweden. But as for many coastal areas, the sea is not just a playground – it is also the city’s lifeblood, and Västervik is home to some of Sweden’s most successful boat-builders.

The long tradition of boatbuilding in this city of just 20,000 people in south-western Sweden can be traced back to the 16th century, when the city was home to Sweden’s second largest shipyard. Back then, the ships were for war or trade. Today, Västervik builds boats that grace luxury marinas around the world.

In 1549 King Gustav I ordered the first of a long line of ships to be built in Västervik. During this period 80 percent of the Swedish fleet was produced in the city. From the 1560 to 1680 a considerable 72 warships and 402 merchant ships were built in the city’s shipyards.

Trade and industry blossomed in the 1700s, leading to the construction of a new shipyard, bringing the total number of yards in Västervik to four. Individual private industries also took to starting their own, smaller yards during this time which ran along Strandaporten.

It was not only shipbuilding that grew in the 18th century, but Västervik also saw the success of its textile and tobacco factories. The boom in merchant trading brought considerable wealth to the city and many of the beautiful large houses that adorn the central streets of old Västervik were built at this time, most notably the town hall which was opened in 1796.

By 1800 Västervik was a city of three thousand inhabitants and its remote trade grew steadily until its peak at the end of the century when Västervik was Sweden’s fourth largest city in terms of foreign tonnage.

The population of Västervik was also steaming ahead during the 19th century, jumping from 2,743 people in 1820 to a staggering 5,230 only forty years later. By the later half of the century, the city could no longer hold the burgeoning population within its original four old quarters and spread out into Södermalm and later also Östermalm.

However, while Västervik’s closeness to the water has arguably been the key to its wealth and success, it has also been its weakness. In the mid fifteenth century the city was attacked from the sea by Danish forces. Again in 1517 and 1612 the city was razed to the ground, each time residents had to rebuild from scratch.

Over the ensuing years Västervik was repeatedly damaged by a succession of disasters such as fires and The Plague, which killed an estimated 300 people in 1711 – so many that the church graveyard became too full and graves had to spill out into the surrounding area.

The later decade of the 18th century was a peaceful period, allowing the ship industry in Västervik to expand, with new shipping routes being forged down to the Mediterranean.

But Västervik’s rich history of shipbuilding did not stop in the 1700s. Rather it has continued, drawing from this established nautical lineage, while striving forward with innovative techniques in construction and design; maintaining its position as one of Sweden’s foremost boating centers as securely today as nearly 500 years ago.

From a small sea kayaks to a 58ft luxury yachts, and underwater robots to sail makers, a wide range of products are manufactured today in Västervik.

Among many leading names in the marine industry based in the city is Olympic medalist Göran Marström, who has been building boats and masts with carbon fiber for the past 20 years. Now his company, Marström Composite, is the world leader in this technology.

Västervik is also home to Vituddens Kanotvarv, one of the world’s oldest manufacturers of kayaks and canoes, whose vessels are used by National Geographic on expeditions in such locations as Alaska, Japan and Korea.

Electronics are also a major industry in the area, and Star Electronics is the east coast’s leading marine electronics company and lists the Swedish Coast Guard as one of its customers.

The future of Västervik’s shipbuilding industry is being nurtured through the city’s dedication to education. Högskolecentrum in Västervik, alongside Chalmers Tekniska Högskola and Linköpings Tekniska Högskola offers an exclusive 2-year Masters Course in Yacht Design, recreational craft construction.

But Västervik’s rich shipbuilding past isn’t only for students or history buffs – one of the best ways to appreciate this aspect of the city is to go back to the roots and enjoy a trip around the stunning archipelago.