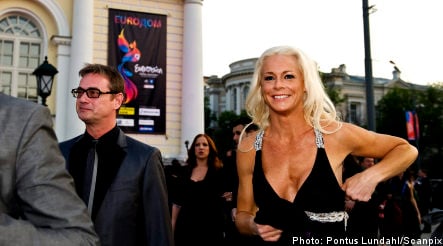 Ernman earned the right to represent Sweden in the 54th Eurovision Song Contest when she won the national “Melodifestivalen” on March 14th in a nail-biting finish with her powerful operatic entry “La Voix”.

“I’m about to faint. It’s totally unbelievable. I don’t know what I should say, I’m totally blank,” Ernman gushed on being declared the winner.

Sweden expects, and will be hoping that Malena Ernman keeps her wits about her and hits all the right notes to claim one of the ten places in the final available in the first semi-final which takes place in Moscow on Tuesday evening.

The second semi-final will take place on Thursday with the final on Saturday evening at the Olympic Indoor Arena in the Russian capital.

The twenty qualifiers will be added to the “big four” of France, Germany, Spain and the UK, as well as hosts, Russia who enjoy automatic final slots.

New for the Eurovision Song Contest 2009 is the re-introduction of national juries to complement televoting in part to try to arrest the advance of so-called neighbourly voting and to encourage more objectivity in the allocation of points.

A total of 42 countries are competing with Latvia returning after an absence of 11 years.