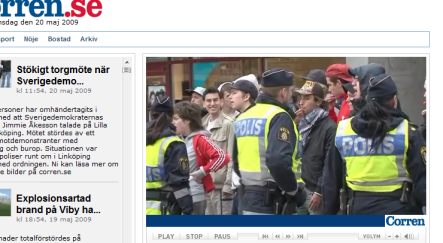 A group of counter-demonstrators disrupted the gathering of Sweden Democrats to such an extent that police were felt forced to detain 18 people.

While there were no reports of any physical injuries, one of the protesters managed to elude police on guard at Linköping’s Lilla torget square and make his way to Åkesson.

The protester then proceeded to press an egg into Åkesson’s face while he was giving a speech.

“It’s frightening that the police can’t protect political figures better than this,” said the head of the Sweden Democrats’ youth wing, Erik Almqvist, in a statement, adding that, “it could just as well have been a knife”.

Police spokesperson Tommy Johansson admitted there had been a temporary lapse in security.

“It was obviously a mistake that it was allowed to happen. It’s something we have to take responsibility for,” he told TT.

“We have spoken with our contact person and apologized for that.”