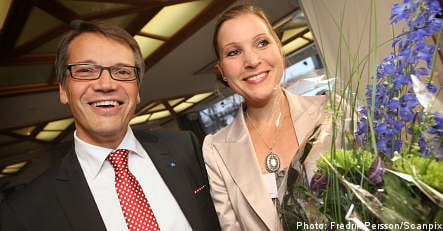 While Sweden bucked the European trend of a declining voter turnout with a increase of 5 percentage points on 2004, only 42.5 percent of the electorate turned out to vote in Sunday’s EU parliamentary elections.

Christian Democrat leader Göran Hägglund told a jubilant party faithful that while the party had achieved its goal of securing one mandate in the election, more needs to be done to increase awareness and interest in EU issues.

Hägglund recognized the success of the Pirate Party as the great sensation of Sunday’s election and called for campaigning to begin earlier.

“To increase interest further and to get more people to vote campaigning has to begin earlier. The campaigns are too short,” Hägglund told news agency TT.

Social Democrat leader Mona Sahlin claimed that she had however noticed a significant difference in attitudes to the election in comparison with 2004.

“The is a big difference. The parties take it seriously and the media has taken its coverage seriously.”

There were significant variations across the country in voter turnout with the highest in Mörbylånga on southern Öland with a 59.4 percent turnout, up 21.5 percentage points on 2004.

Stockholm municipality Danderyd was close behind with 58.5 percent.

The least interest in the election was shown by residents of northerly municipality of Haparanda where only 26.2 percent turned up to vote, closely followed by Älvdalen with 27 percent.

According to EU parliament figures published shortly before 11pm total voter turnout across the continent amounted to 43.4 percent, down from 45.5 percent in 2004 and 49.5 percent in 1999.