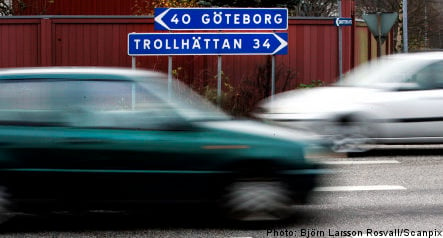 For the 55,000 residents of this small southwestern town, the idea of life without Saab is unthinkable as most are connected to the company in one way or another.

“It’s hard to imagine. People would have to leave Trollhättan to look for work,” said Angela Van der Poel, a deacon at the local branch of the Church of Sweden and whose husband used to work in the automaker’s IT department.

Saab’s US owner General Motors first snapped up a 50-percent stake in the automaker before buying the rest of the company in 2000.

Now, with GM in dire need of cash, Saab has been put up for sale and a buyer is expected to be announced by the end of this month.

Some 3,400 people are employed at Saab’s factory in Trollhättan, and another 12,000 work for suppliers or subcontractors that directly rely on the automaker for their income.

Those figures exclude all the local businesses that rely on that money being spent on their goods and services.

Yet Trollhättan residents are an optimistic lot: they say they are confident that Saab will survive, and the town with it.

“I have always been of the opinion that Saab will continue, I do not think that it will disappear at any time in the future,” said the mayor of Trollhättan, Gert-Inge Andersson.

Andersson was first elected 13 years ago. His son used to work at Saab, while his daughter’s husband still does.

Trollhättan seems an unlikely candidate to rely on the fortunes of one of America’s industrial giants, some 4,000 miles (6,400 kilometres) away across the Atlantic.

To the casual observer, the town has little in common with the epicentre of America’s rust belt: it boasts green and rolling hills, and the pale blue Göta Älv river flows through the surrounding forests.

This breathtaking scenery provides the location for about half of all feature length films shot in Sweden, but seems an unlikely setting for big

Yet aerospace firm Volvo Aero, aircraft manufacturer Lear Corporation and Saab Automobile all have factories in the town.

At Flamengo’s flower shop in the centre of town, 22-year-old manager Peter Saffo is himself a former Saab trainee.

Saffo estimates some 25 percent of his business comes from people who work for Saab, but he says his trade has emerged unscathed by the uncertainty that has clouded the company’s future in the past few months.

“We haven’t seen any effect yet. I’ve been working non-stop since Christmas and through Easter,” he said.

But walk down the town’s main shopping street and stores are far from bustling. Many have put up posters to advertise their special offers.

“There have been some more shops closing,” said Gunnar Peterson, a lecturer in economics at Trollhättan’s University West.

“But I think that is more to do with the economic crisis on a worldwide basis, rather than the problems Saab is having as a carmaker.”

The Bishop Arms, an English-themed pub and the watering hole of choice of many Saab employees, is still doing a brisk trade. Its terrace is full most evenings as customers quench their thirst under the Swedish midsummer sun.

Magnus Nordberg, 38, business editor at the Trollhättan Tidning newspaper, has lived in the town all his life and has covered Saab for more than a decade.

He explained the reasoning behind the confidence in the automaker’s future, telling AFP that Trollhättan’s residents have heard many times that Saab was close to shutting down.

“I think people in this town are used to reading that Saab is in a difficult situation. We have heard that for 10 to 20 years. They think Saab will recover anyway because they have done it before,” he said.

Nordberg also said management had been stressing to employees that GM’s decision to sell was “a big opportunity to start a new era at the company,” rather than a threat to its future.

“Perhaps it is naive, we are very hopeful everything will be okay,” said Lennart Andersson, a taxi driver who lives in Trollhättan and also has friends working at the plant.

Unsurprisingly, Andersson prefers a Saab over Volvo, their Swedish rivals from nearby Gothenburg, some 75 kilometres away.

“It’s maybe a bit more expensive to run, but it’s more of a premium car,” he said.