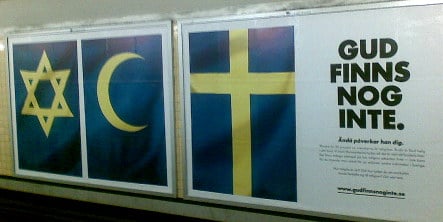 Accompanying the proclamation are images of three flags featuring symbols from Judaism, Islam, and Christianity fashioned in the same shades of blue and yellow found on the Swedish flag.

The ads come from the Swedish Humanist Association (Humanisterna), and are part of a campaign to further debate about the impact of religion on public life and recruit new members to the organization.

“We want to get people to reflect on the fact that religion plays a bigger role that they think,” Humanist Association chair Christer Sturmark told the magazine Resumé.

The Swedish Humanists claim in the ad that less than 20 percent of Swedes are religious.

As a result, the group thinks it’s worth considering how religion affects the lives of the remaining 7 million Swedes when it comes to issues such as abortion, homosexuality, and religious independent schools (‘friskolor’).

Humanism, according to the group, is a secular worldview which emphasizes democracy and human rights and rejects the notion that supernatural beings play a role in life events.

The Humanists also believe that democratic values are often limited by fundamentalist trends and religious dogma.

“It’s not that we want to stop the religious community, but we want to level the playing field,” said Sturmark.

“Religious groups get huge sums from the state every year. We’re dependent on our members.”

Sturmark explained that the campaign was paid for by donations from some the association’s roughly 5,000 members, each of which pay an annual membership fee of 300 kronor ($39).

The Swedish campaign echoes a similar campaign in London which a UK-based humanist group sponsored earlier this year.

The London ads, which also challenged the existence of God, prompted several Christian groups to organize a competing campaign arguing that God does in fact exist – something which Sturmark thinks could also happen in Sweden.

“It wouldn’t surprise me if they answered our campaign here too. But we gladly welcome that. We want very much to start a debate,” he told Resumé.

Åke Sander, a religion professor at Gothenburg University, believes that atheism has become more aggressive in the western world and in Sweden in particular.

He believes the trend depends in part on an increase in the number of instances in which different religions run into one another due to increased immigration, but also because of the earlier belief that secular society would eventually wipe out all religions.

“The last two decades have proven that to be totally wrong. It’s probably more accurate to say that this increase in atheism is a reaction to the increased level of religion in public life,” Sander told the TT news agency.

Swedish archbishop Anders Wejryd, on the other hand, while not commenting directly on the Humanist’s campaign or the role of religion in society, did inform TT that he believes God exists.