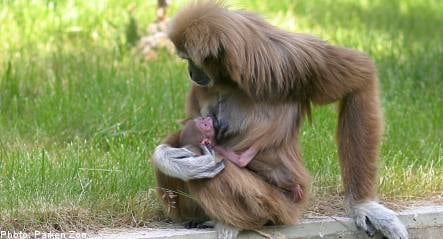 Last winter, zookeepers at the Parken Zoon in Eskilstuna thought the female gibbon appeared lethargic and feared that death was knocking on her door.

But subsequent tests revealed she was pregnant, and last week she gave birth to a healthy baby gibbon.

Both the mother, Jane, and the father, Tarzan, are extremely old gibbons. A 40-year-old gibbon equates to a human of roughly twice that age.

According to zoo head Helena Olsson, the birth of the baby gibbon is nothing short of “miracle”.

As far as she knows, there never been a baby born to a gibbon of Jane’s advanced years anywhere else in the world.

“Jane is so incredibly old…that she’s now given birth to a baby is totally improbable. We are all extremely surprised,” she told the TT news agency.

“It’s like an old lady between 75- and 80-years-old having a child,” she added in a statement.

Gibbons in captivity rarely live longer than 30 years, but both Tarzan and Jane are at least 37-years-old and it’s been 15 years since Jane last gave birth.

Following the arrival of the baby gibbon, zoo personnel were unsure whether Jane would be able to produce milk and care for the newborn, but everything has functioned normally thus far.

“The baby is doing really well, she’s sucking as she should be and Jane is a very capable mother. Even Tarzan has perked up. He’s swinging in the vines, hollering, and doing more tricks than he’s done in several years,” said Olsson.

Both Tarzan and Jane are White Handed, or Lar, gibbons which native to Southeast Asia.