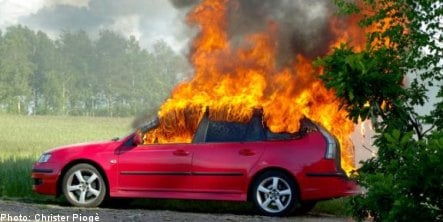 The car, a two-year-old Saab 9-3 station wagon, was parked and its engine was cold when it suddenly caught fire.

Within minutes, the entire vehicle was engulfed in flames, with the owners just having enough time to save the family dog from the roaring flames.

Following a thorough examination of the car’s remains, Saab Automobile’s fire investigators concluded that the fire was not deliberately set, caused by a technical malfunction, or by negligence.

Their investigation did find, however, that the fire started in the front seats, between which were a number of electronic devices, including two iPods, a camera, and a mobile phone.

But suspicions of what may have caused the blaze have centered on the iPod nano.

“Technicians discovered heat damage on the interior of the music player. They suspect the damage was likely caused by overheated electronics,” said Saab dealer Bengt-Erik Johansson to the Hallandsposten newspaper.

But officials from Saab aren’t willing to say that the iPod caused the violent car fire.

“There was electronic equipment in the car’s middle console. We have examined it,” said Saab spokesperson Gunilla Gustavs to TT.

“There were signs of interior heat damage in it. But that doesn’t necessarily mean the fire was caused by it.”

While the iPod’s possible role in the fire remains unclear, the case is far from the first time Apple’s popular music player has been implicated in suspicious fires.

Back in 2007, a man from Atlanta reported that his iPod nano burst into flames while in his pocket.

And on June 25th of this year, the Korean Agency for Technology and Standards issued a statement urging Apple Korea to recall first generation iPod nanos after several reported cases of batteries overheating or exploding, the Dow Jones news service reports.

According to the car’s owner, the iPod is being sent to Apple for further examination and is reportedly being handled by the company’s legal department.

“It’s important to look into whether there is a risk of iPods causing fires when you consider how many there are on the market,” the owner told TT.

According to TT, it was unable to reach a representative from Apple for a comment on the matter.