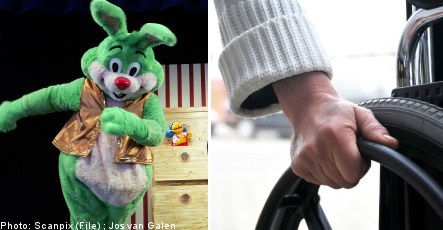 The 33-year-old man from Halmstad in western Sweden had claimed for years that he was bound to a wheelchair and as a result qualified for public assistance in the form of payments made to “people in his immediate environment” who helped him with daily tasks.

While the doctor who originally examined the man didn’t find any reason as to why the man couldn’t walk, the doctor nevertheless accepted the man’s claims.

But the man’s scheme began to unravel back in June 2007 when police raided his home in response to a complaint of abuse and illegal imprisonment.

Among items confiscated by police were several photographs, including a picture of the man dancing with the life-sized bunny which serves as the mascot for the Liseberg amusement park in nearby Gothenburg.

Police then turned over the incriminating photo, along with several others, to the Social Insurance Agency.

“He can stand, walk and dance. In one of the pictures, he is dancing with the Liseberg bunny,” Catharina Andersson of the Halmstad social insurance office told Hallandsposten newspaper.

Upon being confronted with the pictures, the man admitted he was the man in the photo dancing with the fuzzy rabbit.

In his defence, however, he claimed that the picture had been staged because he didn’t want to show off his disability.

But according to Andersson, the 33-year-old can be seen in the photos standing without any support or assistance.