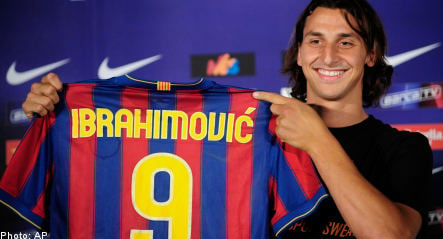 The 27-year-old was transferred from Inter Milan in a deal which will also see Cameroon striker Samuel Eto’o move the other way and the Italian side receive €46 million ($65 million) as well as Alexander Hleb on loan.

“It feels like I’m living a dream now,” Ibrahimovic told a news conference.

“It was not easy for me in the last weeks.”

He said he had always insisted that “only one club can buy me and that is Barcelona… My will to come to Barcelona was too big for staying in Inter Milan.”

“It is a big honour. There are many big clubs but there is only one special club,” he said, adding that he hoped to develop his skills playing with such players as Lionel Messi and Xavi Hernandez.

“I come here to bring something new. I’m here to win and I’ll do my best to win,” he said.

Ibrahimovic will on Tuesday undergo an operation on a broken bone in his hand, suffered during a friendly between Inter and Chelsea during the club’s US tour, Barca’s technical director Txiki Begiristain said.

Wearing the “number 9” shirt formerly held by Eto’o, he later received a rapturous welcome before more than 50,000 fans at the Camp Nou stadium.

Barcelona coach Pep Guardiola has said Ibrahimovic won’t be the club’s last major signing before the end of the transfer window.

And he has warned big-spending rivals Real Madrid that his side won’t give up their reign as European and Spanish champions without a fight.

Real have spent at least €209 million this summer on Kaka, Cristiano Ronaldo, Raul Albiol and Karim Benzema during the close season.

Barcelona beat holders Manchester United to win their third Champions League crown in May in Rome. The club also won the domestic league and cup last season, making them the first Spanish team to win the treble.