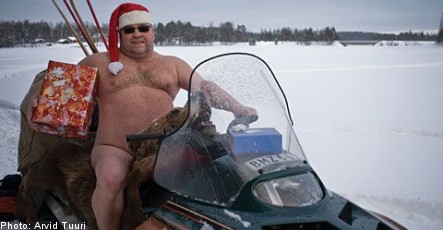 Inspired by films such as “Calender Girls” and “The Full Monty” the group of self-deprecating, mostly portly middle-aged men, wanted to mark the occasion by doing something a little different than the more traditional hunting and fishing calendars.

“We are all in our fifties and sixties and all a little thick around the waist, but we were just having fun with it,” Christer Eriksson, Mr. June and the driving force behind the calendar, told The Local on Friday.

He explained that a calendar put out last year by a group of hunters in Jutis, a small community in the mountains of northwestern Sweden, also emboldened the men of Arvidsträsk to make a calendar of their own.

Twelve volunteers were hastily assembled among the organizers of the Arvidsträsk annual fishing event and each was assigned a month of the year to bare all under the adoring eye of local photographer Arvid Tuuri’s camera.

“Recruiting people was actually the easiest part. Maybe there’s more pressure when you’re 25 and in good shape, but when you’re over 50 and have a big belly, no one really minds,” Eriksson explained.

The calendar features the models in various outdoor poses, from riding snowmobiles to fishing in the midnight sun. Seasonal variations in the far north of Sweden can be large and several of the burly beauties had to overcome the elements to perform.

The calendar has been sponsored by local firms in the small community around Älvsbyn which is just over 140 kilometres south of the Arctic Circle.

Christer Eriksson told The Local that there has been a lot of interest in the calendar and since its launch in June almost 400 copies have been sold.

The local tourist office in Älvsbyn confirmed that they have had a number of calls from people all over the country wondering where they can get their hands on it.

“I reckon people think it is bit fun, especially as it is a gang of middle-aged old fogies,” Kristina Ekvall told The Local on Friday.

While the calendar is mostly a bit of fun, the group has decided to donate 10 percent of the revenues to Älvsbyn women’s refuge and a further 10 percent will be given to research into prostate cancer.

When asked by The Local if any of the men saw a future for themselves as models, Christer Eriksson replied:

“You never know, some of the pictures look pretty good. We’ll see what happens.”