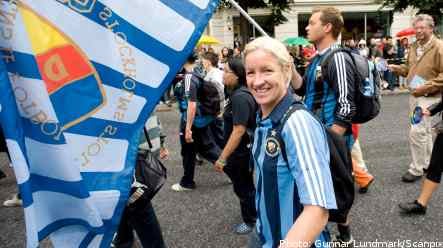 The Swedish capital was painted rainbow-coloured on Saturday as the 12th annual gay pride march kicked off in the city centre.

Stockholm Pride has been running since 1998 and is said to be the largest parade of its kind in northern Europe.

Part demonstration, part music festival, the event is a quirky mix of culture and politics. This year the sports world, long conspicuous in its absence at Pride, finally took a stand against prejudice.

“I think it is important in today’s society that sports clubs also support this kind of thing,” Victoria Svensson, an openly gay footballer with the Djurgården and Swedish women’s football teams, was quoted as saying by the TT news agency.

The football clubs were welcomed by Pride organizers.

“Finally. It is about time. I feel happy and proud that the clubs participate in this demonstration for the equal rights of all. I see this as the opening salvo for a new chapter in the history of sport,” Pride parade organizer, Joachim Åberg, said in July when the club’s participation was confirmed.

Revellers joined a number of Swedish celebrities as they strutted through the streets of Stockholm, sporting an array of glamorous and colourful costumes.

For the past week, bars, cafés, buses and taxis have flown the rainbow flag, an emblem for the gay community worldwide, to mark Stockholm Pride.

As has become the custom, politicians of all colours have been getting in on the act. The headquarters of Prime Minister Fredrik Reinfeldt’s Moderate Party had the same flag draped across its windows for the duration of the week.

Sweden, known for its liberal attitudes, passed a law earlier this year giving homosexuals equal status to marry in a religious ceremony.

According to the police around 30,000 people took part in this year’s parade and despite the at times bitter weather, up to 350,000 spectators lined the route.