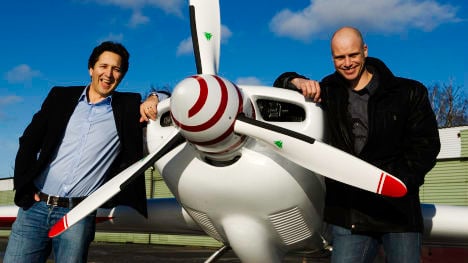 If you’re struggling to find the perfect present for someone who has it all, there’s a Swedish company that’s taking gift-giving to a new level.

Live It was co-founded in 2005 by Brits Martin Charlton and Jonathan Kirby, and their unique concept is based on selling experiences instead of material items.

“Life is based on experiences,” says Charlton. “From spa days to diving with sharks to jumping from airplanes, we have the complete spectrum all across. We have calm experiences like wine and cheese tastings, to extreme adrenaline experiences from bungee jumping to aerobatics.”

The story of Live It began at a pub in Västerhaninge, where the two met many years ago. They had both dabbled in running different businesses – at the time, Kirby was involved in an SMS advertising concept, Charlton was running a food delivery company.

“We have the English common bond and became friends,” recalls Charlton. They both moved to Sweden to be with their respective girlfriends, and it was here they had the idea of founding Live It after other business endeavours were unsuccessful.

“We now work with Red Letter Days from the UK, and were sort of inspired by them,” says Charlton. “They are considered the founders of the concept they started back in the 1980’s.”

Charlton says since its conception in October 2005, Live It has been constantly increasing in popularity. In their first year they made 5 million kronor; their second year brought in 16 million; their third saw 32 million.

“This year we should reach about 50 million SEK,” says Charlton. “I didn’t imagine in the beginning that it would be this popular so quickly. But it became apparent that we were sitting on something with a large potential.”

He says their ideas come from customer recommendations, and brainstorming what experiences might be fun.

“I’ve tried quite a few myself,” he says. “It’s impossible to pick a favourite. I enjoyed aerobatic flights, but ballooning across Stockholm and patting wolves in Kolmården were completely different experiences. They are favourites for different reasons.”

Charlton attributes the company’s success to exceptional customer service. He says rather than arranging experiences themselves, Live It partners with businesses that are trained and skilled in specific areas, such as ballooning, bungee jumping, or boating. He adds that while people might be nervous about engaging in an experience, their adrenaline and excitement level is sure to peak, and the company has had no accidents to date.

Experiences can be purchased on-line, in person at their shop, and now at over 60 ICA and Coop stores. All experiences are also exchangeable, so if a recipient doesn’t feel they have the courage to parachute out of an airplane, for example, they are able to select another option whereby their feet stay planted firmly on the ground.

If you’re looking for a particularly Swedish experience, Live It offers dog sledding, trips to the Ice Hotel, bear and moose-watching safaris, and the chance to pat wolves in Kolmården.

“You might be petrified and scared, but it’s all extremely safe,” he says. “I’ve been to meet the wolves and physically pat them, though it’s more like a free facial because they lick you all over.”

“I think as we have become more affluent as a population, it’s extremely difficult to find the perfect gift,” Charlton says. “You want to give something unique that’s liked. Life is based on experiences, hence the name Live It. We are programmed for experiences. The human is programmed to experience things. That’s why Live It has been popular.”