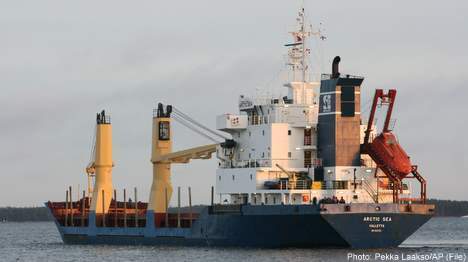 “The demand was made to the shipping company,” Jan-Olof Nyholm of CKP told TT news agency.

At the same time, Viktor Matvejev, majority owner and managing director of the shipping company Solchart management, denied to Finnish media that any ransom had been demanded.

“We are not going to engage in a debate with the shipping company, but we will stand by our information,” Nyholm said.

He did not want to reveal the amount of the ransom, who is suspected of being behind it or when the the shipping company was contacted.

Police did not want to reveal the information previously “out of respect for personal security”, Nyholm said.

The German edition of the Financial Times newspaper reported an unconfirmed ransom amount of $1.5 million.

Police cannot confirm with certainty that the ship has been hijacked, but say that there there are strong reasons to suspect that the vessel is under the control of hijackers.

CKP is the equivalent of the Swedish National Investigation Department (Rikskriminalpolisen). Nyholm said the investigation has occurred in cooperation with Swedish and Maltese authorities.

On Friday night, the Cape Verde coast guard confirmed to media that the Arctic Sea had been sighted approximately 740 kilometers from the islands, but the rumours were later denied by Alexander Karpushin, Russia’s ambassador to Cape Verde.

On Saturday, the Arctic Sea – sailing under a Maltese flag, manned by a Russian crew and carrying Finnish cargo – was identified by the Automatic Identification System (AIS), which tracks the ship.

At that time, the vessel was in the Bay of Biscay west of France and travelling southwest. The system received the first signal at 10:08 am Swedish time and a second signal at 10:25 am.

The Arctic Sea, which was carrying a load of timber, is suspected of being hijacked between the Swedish islands of Öland and Gotland on July 24. The vessel was en route to Bejaia in Algeria when it disappeared.

On Wednesday, Russian president Dmitry Medvedev appointed the Russian navy to search for the ship. Nato and Russia have both confirmed that they are in contact regarding the Arctic Sea.