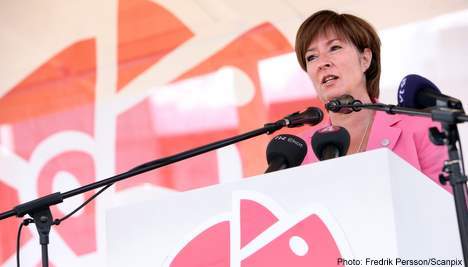 If one parent doesn’t pay child support, the Swedish Social Insurance Office (Försäkringskassan) will pay maintenance support, currently a maximum of 1,273 kronor per month per child. The Social Democrats have previously wanted to increase the amount by 100 kronor per month, but Sahlin now believes that an even greater increase is warranted.

She does not yet want to give an exact amount, but told TT news agency that the issue will be addressed in the party platform for the upcoming elections.

Sahlin said that the increase was timely “because unemployment among these groups has grown” and “because the effects of reduced unemployment benefits and healthcare have had greater impact on the household incomes of these single parents.”

Speaking to a group of 800 in her home municipality of Nacka on Saturday, Sahlin criticized the government multiple points: the labour market, taxes, education, healthcare, its policy on Iran – but most of all on equality and equal opportunities.

Social Democrat leaders also want to tighten the requirements for private actors within healthcare and education. It should not be possible to make huge profits by lowering the quality or concentrating on particular target groups.