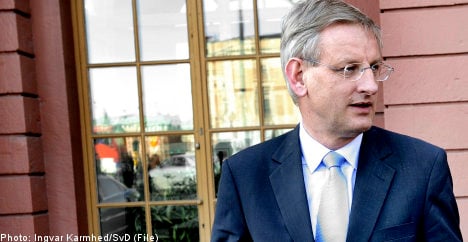 Writing on his blog, Bildt argued that Sweden’s free press and tradition of free speech are the best defence against “breaches of judgement, bad taste and transgressions of core societal values.”

“There are calls from some quarters in Israel that we in some way or another should take an official position to distance ourselves from this article or even to intervene to prevent such an article being published,” Bildt wrote on Thursday.

“But our country does not work that way – and neither should it.”

Bildt argues that were he to go in and correct all the eccentric contributions to debates in various media then he would have little time left over for anything else. He also argued that criticism against some could be understood as approval of others.

Carl Bildt drew parallels to the debate around the Muhammad cartoons that raged in a similar fashion in 2006. He argued that on that occasion Sweden gained respect for the position that tolerance and understanding are best constructed through an open society.

Bildt however expressed understanding for the feelings of the Israeli people over the article penned by photojournalist Donald Bodström in which he alleged that the Israeli Defence Force systematically removed and traded the organs of dead Palestinian men.

“That the accusations of the article’s author awoke strong feelings in Israel is not difficult to understand. Bitter historical experience has led to a natural and strong sensitivity to implications or accusations which could give anti-Semitism a chance to develop,” Bildt wrote.

The foreign minister concluded by defending the importance of maintaining a free press and protecting freedom of speech but said that there were lessons to be learned from both this and the Muhammad cartoon debate.

“We live in a world where the public debate spills over old boundaries and where we all in various contexts would be wise to be aware of the historical, national and religious sensitivities.”