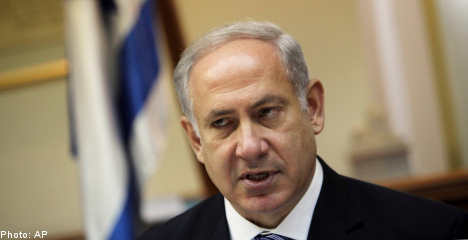 “We are not asking the Swedish government for an apology, we are asking for their condemnation,” a senior official quoted Prime Minister Benjamin Netanyahu as telling ministers during a weekly cabinet meeting.

Finance Minister Yuval Steinitz of Netanyahu’s rightwing Likud party said “the crisis will continue as long as the Swedish government doesn’t change its attitude toward this anti-Semitic article. Those who do not condemn it are not welcome in Israel.”

“There is no question of canceling or delaying this visit, but it is clear that this incident will cast a worrying shadow over meetings if it is not resolved,” Israeli foreign ministry spokesman Yigal Palmor said.

The Swedish government has declined to condemn the piece, saying it has to respect the principle of freedom of expression enshrined in its constitution.

The article has sparked outrage in Israel, with Netanyahu and scores of ministers and commentators calling it a “blood libel” smacking of anti-Semitic accusations against Jews.

“And today it is IDF (Israel Defence Forces) soldiers who are accused of killing Palestinians to take their organs,” he said.

The head of the Israeli Government Press Office, Daniel Seaman, said on Sunday he would not give accreditation to two of the newspaper’s reporters.

“We are not obliged to accredit them. It will take time. We have to conduct verifications, maybe to examine their blood type to know whether they can be organ donors,” Seaman, known for controversial statements, told army radio.

Elisabet Borsiin Bonnier, the Swedish ambassador to Israel, had initially expressed outrage at the article, but Stockholm distanced itself from her remarks several days later, drawing a stinging response from Israeli officials.